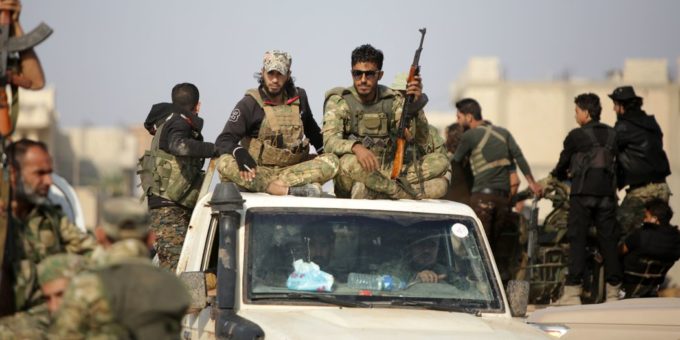 AKCAKALE, Turkey — The Turkish Army halted its incursion into a Kurdish-run area of northern Syria on Wednesday morning, after a deal between the Turkish and Russian governments promised that Kurdish fighters would retreat from the Turkish-Syrian border.

In a statement, the Turkish defense ministry said it would not advance beyond an area of roughly 900 square miles that Turkish-led forces have seized from Kurdish control since invading the area two weeks ago.

“At this stage, there is no further need to conduct a new operation outside the present operation area,” the statement said.

The announcement followed an agreement on Tuesday night between President Recep Tayyip Erdogan of Turkey and his Russian counterpart, Vladimir V. Putin, that significantly redrew the battle lines of the eight-year-old Syrian conflict.

The deal calls for Russian and Turkish troops to fill a military vacuum created by the sudden United States withdrawal from northern Syria this month, which left the Kurds, American allies, exposed to the Turkish offensive.

It allows the Syrian government, backed by Moscow, to re-establish dominance over a swath of the country that the Kurds have controlled. Syrian government forces will deploy to the region for the first time in half decade.

Under the terms of the deal, Kurdish fighters must retreat more than 20 miles from the Turkish border by Monday night. Turkish troops will be allowed more than six miles inside Syria to conduct joint patrols with Russian forces along the length of the border region, and Turkey will also be allowed to maintain oversight of a deeper pocket of land it has seized, which extends roughly 20 miles inside Syria.

The Kurdish authorities were not involved in the talks between Mr. Putin and Mr. Erdogan, and have yet to respond to the deal. But in an earlier phase of the conflict they agreed to allow Russian and Syrian government troops inside their area of control, and on Tuesday completed a withdrawal from a central stretch of the border area, under the terms of an earlier American-brokered cease-fire.

The situation has its roots in the early years of the Syrian civil war, when a Kurdish-led militia fighting against the Islamic State established a form of self-rule in northeastern Syria, while the Syrian government was distracted by Arab rebels in other parts of the country.

The militia’s rise to prominence alarmed the Turkish government, since it is the Syrian offshoot of a Kurdish guerrilla movement that has waged a decadeslong insurgency against the Turkish state, a longtime American ally.

But there was the little the Turkish government could do, since the Kurdish fighters operated with the protection of the United States military from 2014 onward. The militia, known as the Syrian Democratic Forces, became the main ground force of an American-led international coalition working to force Islamic State extremists out of Syria.

As the Islamic State retreated, the Kurdish fighters became, in effect, the government of roughly a quarter of Syria, including — to Mr. Erdogan’s fury — most of the Syrian border with Turkey.

For several years, American troops kept order between its two allies, Turkey and the Syrian Kurds, acting as de facto peacekeepers on the border. But then Mr. Trump ordered American forces to begin a withdrawal from the region this month.

That allowed Turkey to invade, and prompted the Kurdish leadership to turn in desperation to the Syrian government and its Russian backers for protection, in a bid to prevent Turkey from taking over the entire Kurdish-held area.

But as Tuesday’s deal showed, it came at the cost of renouncing Kurdish military control over the majority of its populated areas.

Turkish-backed Syrian Arab militias have nevertheless expressed wariness about the deal, fearing that Kurdish fighters will secretly remain near the border under the flag of the Syrian and Russian armies.

“We do not trust Russia,” said Hisham al-Skeif, a spokesman for one of the Turkish-backed factions. “The Russians did not comply with any agreement previously.”

But Mr. al-Skeif said he was happy that the dream of an autonomous Kurdish region was coming to an end. “This is a great pleasure for us even if we have not achieved everything we want,” he said.

The murder behind the Hong Kong protests: A case where no-one wants the killer