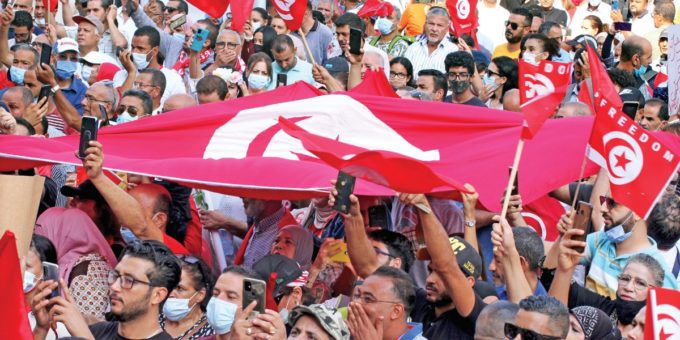 JEDDAH: Thousands of marchers took to the streets of Tunisia on Sunday in demonstrations of support for President Kais Saied’s drive to rid the country of corrupt politicians.

Crowds on Bourguiba Avenue, the main thoroughfare in central Tunis, chanted “We are all Kais Saied, we are all Tunisia” and “The people want the dissolution of parliament.”

As well as Tunis, there were simultaneous marches in the industrial city of Sfax, the seaside town of Sousse,and Sidi Bouzid, Gafsa and Monastir.

With up to 5,000 demonstrators in Tunis alone, the event dwarfed minor protests last week against what the president’s critics call a “power grab.”

Saied assumed executive power under the constitution on July 25, when he sacked the prime minister, suspended parliament and began ruling by decree.

The moves command overwhelming public support among Tunisians frustrated by corruption and economic incompetence in a political class dominated by the Islamist Ennahda party, whose leader Rached Ghannouchi was parliamentary Speaker.

President Kais Saied, elected in late 2019, has said his aim was to save Tunisia from ‘imminent peril’ during an economic crisis aggravated by the COVID-19 pandemic.

Saied, elected in late 2019, has said his aim was to save Tunisia from “imminent peril” during an economic crisis aggravated by the COVID-19 pandemic. Official unemployment has soared to almost 18 percent and the economy has grown by only 0.6 percent in the past decade.

“Saied wants to implement reforms and we back him,” Noura ben Fadhel, a civil servant, said at the Tunis rally.“I came to support change to end the current decline. We’re fed up with it. It’s been going on for 10 years and that’s enough.”

Elyes Ouni, 28, who campaigned for Saied in 2019, said: “July 25 ended a faulty system. Now it’s in the morgue and today we’re going to bury it.” He blamed parliament for the “deterioration of the country.”

Another demonstrator, Noura Bensalah, said: “We demand that Saied dissolve Ennahda and the political parties involved in corruption.”