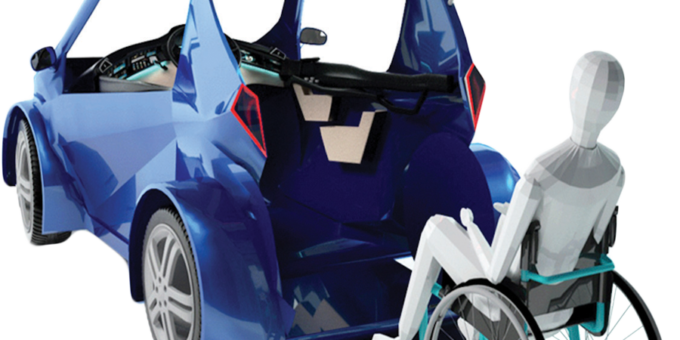 DUBAI: In the Middle East, those who are differently abled or have some impairment are referred to as “people of determination” because of the tremendous effort required to live a life that others consider normal.

HawKar is her way of expanding her world and living an independent life — a smart and sustainable electric vehicle wheelchair users can use to drive to their destination.

“It’s more secure than an electric scooter and is adapted to different physical disabilities,” she said.

HawKar has a low speed of 45 kilometers per hour (km/h), and can be charged directly at home with a standard plug-in.

Jallouli, who has a degree in food technology, has been working on the concept since 2016 together with her friend and co-founder Seifeddine Aissa, a mechatronics engineer with a passion for cars.

“This vehicle will allow people with physical disabilities to move long distances every day and to be autonomous and free to go to study, work, shop or simply go out (to)meet friends without thinking of how or looking for help,” Jallouli said.

Cars for wheelchair users already exist in other countries. The Canta has been motoring differently abled users down bicycle paths in the Netherlands at speeds of 45 km/h since 2006, while the Chairiot solo was introduced in California in 2014.

Similar products are in development in the Czech Republic and the UK. By and large, however, these vehicles remain confined to their home markets, and the majority of units available in the Middle East and North Africa (MENA) are conversions, typically altered to accommodate wheelchair users as passengers, not as drivers.

Testimonials on the brand’s website talk of the need for such a concept, especially in MENA, HawKar’s target market.

Jallouli said: “The infrastructure and public transport are not suitable for people with disabilities in the MENA region, and we need to improve their lives and include them in society — especially when you look at the statistics and see that they represent about 10 percent of the population in the MENA region!”

The World Health Organization estimates that about a billion people worldwide — or 15 percent of the population — live with some kind of disability.

In the MENA region, the projection runs to about 30 million people, many of whom experience discrimination and social exclusion. Figures for wheelchair users alone are not available. Reliable data is hard to find because there is no standardized way of collecting this information — when it is gathered at all.

HawKar has already been recognized internationally. Last year, the founding duo presented their idea alongside speakers from NASA at a forum on urban livability during the Global Entrepreneurship Summit in The Hague.

The two also toured Silicon Valley in the US to understand the startup ecosystem and connect with industry experts.

“We had a chance to visit the Tesla factory, and one of our supporters is a former vice-president of plant manufacturing at Tesla,” Jallouli said.

They have won awards in Morocco and Tunisia, and HawKar was a finalist at the MIT Arab Start-Up Competition 2019.

So far, HawKar has been funded by electronics manufacturer Actia Engineering Services, where the startup is incubated, and has been able to garner technical support and advice from experts when required.

• This report is being published by Arab News as a partner of the Middle East Exchange, which was launched by the Mohammed bin Rashid Al Maktoum Global Initiatives and the Bill and Melinda Gates Foundation to reflect the vision of the UAE prime minister and ruler of Dubai to explore the possibility of changing the status of the Arab region.

How coronavirus is affecting the entertainment industry

On Fuel Prices, Minister Says Where Will Money For Free Jabs Come From
2021-10-11