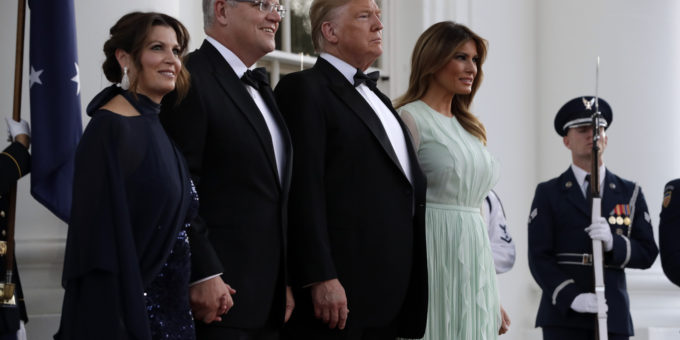 “The first lady and I are honored to welcome you and Jennifer to the White House, and we look forward to hosting you for a state dinner tonight in the Rose Garden,” the president told Morrison during a pomp-filled military arrival ceremony Friday. “It will be quite something.”

According to the first lady’s office, which planned the dinner, the colors for the visit are green and gold, Australia’s national colors. Unlike state dinners past, this one was held outdoors, under a crisp autumn sky.

The White House said the evening’s performance will include musical groups from the Army, Marine Corps, Navy and Air Force.

For wine, guests were served a Spring Mountain Sauvignon Blanc 2017 out of the Napa Valley and the Argyle Pinot Noir “Reserve” 2016 from Australia.

A table is set during a media preview for the State Dinner with President Trump and Australian Prime Minister Scott Morrison in the Rose Garden on Thursday. (AP Photo/Alex Brandon)

The president and first lady Melania Trump greeted Australian Prime Minister Scott Morrison and his wife, Jenny, with handshakes and kisses on the Pennsylvania Avenue side of the mansion Friday evening. Meanwhile, the worlds of politics, media and even sports collided as a stream of administration members from both countries, aides, lawmakers and even golfer Greg Norman headed outside for the open-air dinner.

Trump attorney Rudy Giuliani was also among the more than 170 guests.

Lachlan Murdoch, executive chairman and CEO of FOX Corp., was also in attendance.

Friday’s dinner is just the second state dinner of Trump’s administration and the first in more than a year. By comparison, he’s had state visits to Japan and Britain this year, in addition to other such visits in his first two years in office, including one to Beijing, billed by China as a “state visit, plus.”

As he arrived in Washington on Thursday night, Morrison said he looked forward to celebrating 100 years of “mateship” between the U.S. and Australia.

“There are many larger, I suppose, more powerful friends that America has, but they know that they do not have a more sure and steadfast friend than Australia,” he told reporters who accompanied him to Washington. “And so I’m looking forward to spending time with our American friends here over the next few days and celebrating our tremendous relationship.”

Trump and Morrison will spend part of Sunday together when they tour a new, Australian-owned manufacturing facility in Ohio.

Beyond socializing, the leaders held talks Friday on military, intelligence and economic issues, focusing on the Indo-Pacific region.

Just In! Kartik Aaryan and Sara Ali Khan’s Gorgeous Photo Together Says it All!
2019-03-20