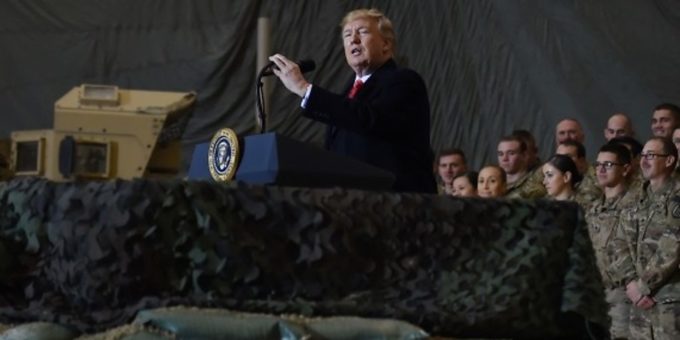 President Donald Trump has made an unannounced visit to American troops in Afghanistan and said the US and the Taliban have been engaged in talks.

“The Taliban wants to make a deal,” Mr Trump told troops at Bagram airbase on his first trip to the country, where he also met Afghan President Ashraf Ghani.

The visit for Thanksgiving comes after a prisoner swap with the Taliban aimed at resuming peace negotiations.

Some 13,000 US troops remain in Afghanistan in what has become America’s longest war, 18 years after the US intervention to oust the Taliban after the 11 September 2001 attacks.

Mr Trump did not give exact numbers but said he was proceeding with a plan to cut troop levels to about 8,600. “We’re going to stay until such time as we have a deal or we have total victory, and they want to make a deal very badly.”

Talks with the Taliban collapsed in September when President Trump cancelled secret plans to invite senior Taliban leaders and President Ghani to meet at the US presidential retreat of Camp David, near Washington DC.

During a visit that lasted two-and-a-half hours, Mr Trump served turkey to troops at the base near Kabul and sat down to eat Thanksgiving dinner with them. He then posed for photographs and addressed the troops, in a trip that was shrouded in secrecy for security reasons.

Earlier this month, the Taliban freed two Western academics who had been held hostage since 2016 – American Kevin King and Australian Timothy Weeks – in exchange for three imprisoned senior militants.