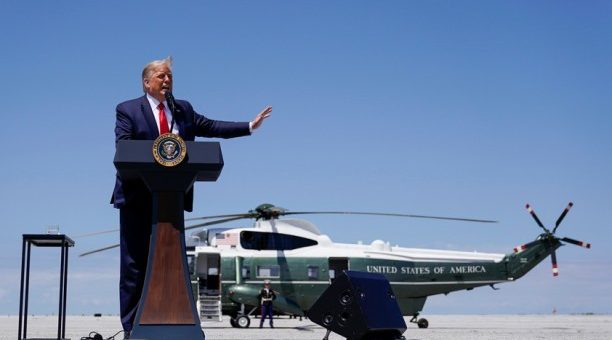 US President Donald Trump said on Thursday it was possible the United States would have a coronavirus vaccine before the November 3 election, a more optimistic forecast on timing than anything suggested by his own White House health experts.

Asked on the Geraldo Rivera radio program when a vaccine might be ready, Trump said, “Sooner than the end of the year, could be much sooner.”

“Sooner than November 3?” he was asked.

“I think in some cases, yes possible before, but right around that time,” Trump said.

Later at the White House, Trump said he was optimistic a vaccine would be available around that date. Asked if it would help him in the election, he said, “It wouldn’t hurt. But I’m doing it, not for the election; I want to save a lot of lives.”

Trump, who is seeking re-election to a second term amid a US economy crippled by coronavirus shutdowns, has pushed for schools to reopen and things to get “back to normal” as coronavirus deaths in the country average more than 1,000 per day.

Top government health officials have said corners would not be cut in the race to secure a vaccine against the virus.

Dr Anthony Fauci, the top US government infectious diseases official, offered a more conservative view in a Reuters interview on Wednesday, saying there might be an indication that at least one vaccine works and is safe by year end.

The frenetic race to develop a Covid-19 vaccine has intensified safety concerns about an inoculation, prompting governments and drugmakers to raise awareness to ensure their efforts to beat the coronavirus are not derailed by public distrust.

Health Secretary Alex Azar on Thursday denied the push for a vaccine was political, but did not say whether he believed it was possible to have a vaccine ready before Election Day.

He said he would take a coronavirus vaccine authorised by the US Food and Drug Administration. “We’re going to run a transparent process,” he told MSNBC. “The best thing we can do for vaccine hesitancy is ensure that the data is out there.”

Democrats in the House of Representatives on Thursday introduced legislation that would require the FDA to consult with a panel of experts to ensure a vaccine doesn’t get rammed through too fast. The panel, the Vaccines and Related Biological Products Advisory Committee, is made up of experts from academia, industry and government.

While a quick vaccine is essential, bill sponsor US Representative Raja Krishnamoorthi said, “it is even more important that quality is not sacrificed for speed in testing and evaluating any such vaccine.”

Haligonian or Torontonian? Canadian Jeopardy! champion reflects on her roots
2022-04-24