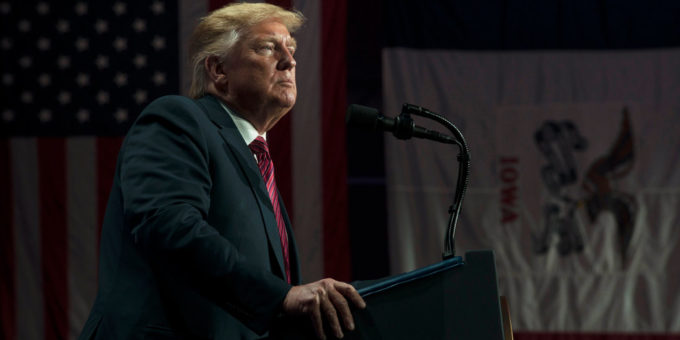 WASHINGTON — President Trump invoked executive privilege to block access by Congress to documents about how a citizenship question was added to the 2020 census ahead of a House committee vote to recommend that two cabinet secretaries be held in contempt of Congress over the matter.

In a letter to the chairman of the House Oversight and Reform Committee, Representative Elijah E. Cummings of Maryland, the Justice Department said that Mr. Trump had decided to invoke his secrecy powers to provide a lawful basis to defy the panel’s subpoena for the census-related materials.

In response, Mr. Cummings put off until later on Wednesday a vote whether to recommend that the House hold Attorney General William P. Barr and Commerce Secretary Wilbur L. Ross Jr. in contempt. Mr. Cummings called the move “another example of the administration’s blanket defiance of Congress’ constitutionally mandated responsibilities,” adding that it raised a question: “What is being hidden?”

In its letter, the Justice Department maintained that it already had turned over many materials in response to the subpoena, but that it had to keep certain information confidential to protect the candor of internal and attorney-client deliberations.

The House voted on Tuesday to authorize the Judiciary Committee to file a lawsuit asking a judge to order the executive branch to comply with two subpoenas related to the Mueller investigation, and explicitly empowering committees to file such litigation over other subpoenas without votes of the full House. But to date the House has not voted to hold any Trump official in contempt of Congress.

The fight over the census centers on liberals’ suspicions that asking respondents to say whether they are American citizens could be a deliberate ploy to tilt the every-ten-years reapportionment of House seats, shortchanging areas with higher levels of immigrants.

One version of this idea is that people who lack documentation to lawfully reside in the United States would be afraid to turn in their questionnaires, resulting in a population undercount.

The Census Bureau has estimated that asking all U.S. residents whether they are citizens may spark a 5.8-percent decline in response rates from noncitizens, which Democrats fear will skew the reapportionment of House seats toward Republicans while depriving states of federal resources. Apportionment of House districts has been based on raw population, not the number of eligible voters.

In sworn testimony before Congress, Mr. Ross said he had decided to add the question “solely” in response to a Justice Department request in December 2017 for data to help it enforce the Voting Rights Act of 1965. Three federal trial judges have ruled that the evidence in the record demonstrates that Mr. Ross was dissembling.

New evidence from the computer files of a deceased Republican strategist suggests that the administration’s actual reason was to collect information that might allow states to draw voting districts counting only eligible voters rather than, as is the current practice, all residents. That would, the strategist wrote, “be advantageous to Republicans and non-Hispanic whites.”

The Supreme Court is already weighing whether adding the citizenship question to the census was lawful, and may hand down a ruling in the coming weeks. But regardless of the outcome of that case, House Democrats want to learn more about what Trump administration officials were privately saying to each other about their motivation for that move.

A committee vote to recommend holding Mr. Barr and Mr. Ross in contempt for not fully complying with its subpoena over the census matter would be the latest action by the Democratic-led House to intensify pressure on Mr. Trump and his inner circle to furnish critical witnesses, documents and other information that would fuel an array of investigations the House has launched into the president’s conduct and policies.

Wednesday’s actions in the Oversight Committee could mark the second time this year that a committee has recommended members of Mr. Trump’s cabinet be held in contempt of Congress. The Judiciary Committee had sought a contempt resolution against Mr. Barr for his refusal to provide the panel an unredacted version of the Mueller report as well as the evidence that supported the special counsel’s conclusions.

House leaders decided for now against voting to hold Mr. Barr in contempt after the Justice Department began on Monday to share some of the special counsel’s evidence with the committee. For the same reason, it is not yet clear whether the House Judiciary Committee will use its authority to file a lawsuit against him.

In the Oversight Committee’s subpoena fight, members have protested Mr. Barr’s instructions to a subordinate involved in the census to defy a subpoena requiring him to appear for a deposition based on a longstanding House rule that government lawyers are not permitted to accompany a witness in the deposition room.

The Trump administration on Tuesday disclosed a department memo claiming that the House rule is an unconstitutional intrusion on the president’s power to make sure subordinates do not disclose information that might be subject to executive privilege.

Democrats also complain that Mr. Ross has prevented the committee from gaining access to all the information its subpoena covers from his department, which houses the Census Bureau.

Republicans protested the committee action and tried unsuccessfully to block it from going forward, arguing that Democrats had rushed the action in an attempt to influence the Supreme Court before it rules. The Trump administration has called the Oversight investigation an attempt to meddle in the legal fight. Democrats first tried to launch the probe last year, when they were in the minority, but majority Republicans refused to pursue it. In January, when Democrats assumed the majority in the House, Mr. Cummings said he would make the investigation a priority.

Taken together, this week’s action by committees and the full House are part of a strategy by House Speaker Nancy Pelosi to hold off calls to quickly impeach Mr. Trump by demonstrating that there are other ways to hold him and his administration publicly accountable for misconduct.

The House’s vote Tuesday should expedite the process by which other committees embroiled in disputes with the Trump administration can seek to have the courts enforce their oversight powers.

Gaza parents struggle to join kids for treatment in Israel

As Hurricane Sally Looms, the Gulf Coast Braces Itself Yet Again
2020-09-15