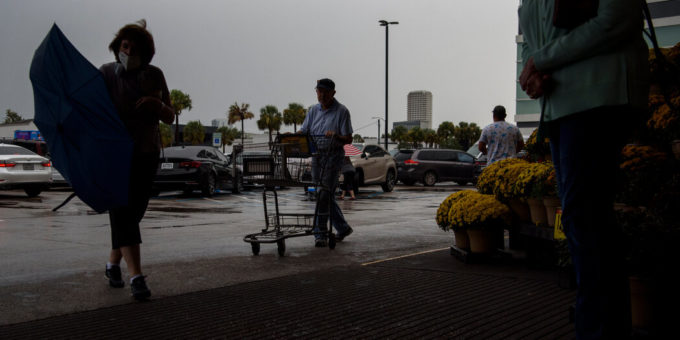 Weather-weary Texans braced for another assault on Monday as Tropical Storm Nicholas strengthened while it began to move over the state’s Gulf Coast with lashing wind gusts and driving rain.

The center of the storm was just offshore Monday night, moving north-northeast over the Gulf of Mexico. Forecasters said it could achieve hurricane strength before landing on the coast of central Texas by Monday night.

Nicholas was expected to bring more than a foot of rain to parts of coastal Texas, the National Hurricane Center said, raising concerns for flash flooding. Warnings of a dangerous storm surge extended east to Louisiana, where people are still recovering after Hurricane Ida battered the southern reaches of the state two weeks ago.

“We have prepared and are waiting for whatever Nicholas brings,” he said.

As officials warned that the rain could worsen later in the day, Texans near the Gulf Coast braced for flooding.

“This is a storm still with some unpredictability,” Sylvester Turner, the mayor of Houston, said in a news conference on Monday. “But we know this is going to be primarily a rain event.”

He encouraged people to stay off the roads through at least Tuesday morning, and said that barricades had already been erected in dozens of locations throughout the city. Public transportation in the city had been suspended.

Mr. Turner thanked Harry Styles, who was scheduled to perform in the city on Monday, for postponing his concert.

“This is the spirit we certainly want to see exemplified,” Mr. Turner said.

At a news conference on Monday, Gov. Greg Abbott signed a disaster proclamation to include three cities and 17 counties along the Texas coast.

“Texas is ready to respond,” he said

Schools in the Houston Independent School District, the largest public school system in Texas, have canceled classes for Tuesday. And the Port of Houston announced that it would halt operations at its container terminals on Monday afternoon and keep them closed at least through Tuesday morning.

High-water vehicles were stationed across Galveston County on Monday to prepare for possible flooding, said Zach Davidson, the spokesman for the office of emergency management there.

Residents should find safe places to stay by the evening and should remain cautious — even if the streets look manageable in their own neighborhoods, he added.

“It may be all right where you are, but if you get on the road to go somewhere else and those roads get flooded, it becomes a very dangerous situation,” Mr. Davidson said.

The hurricane center warned on Monday afternoon that the “combination of a dangerous storm surge and the tide will cause normally dry areas near the coast to be flooded by rising waters moving inland from the shoreline.” It also warned of possible life-threatening flooding along the upper Gulf Coast, near the cities of Freeport and Lake Jackson.

The forecast evoked memories of 2017, when Harvey, the wettest tropical cyclone on record in the United States, brought more than 60 inches of rain in eastern Texas, triggering deadly flooding and causing catastrophic damage.

Officials in Louisiana, too, were mindful of lessons from past storms.

“One of the things we have to guard against is dismissing the threat of this storm because it is not projected, currently, to reach hurricane strength before it makes landfall,” Gov. John Bel Edwards of Louisiana said at a news conference on Monday afternoon, pointing to the catastrophic damage recently inflicted by heavy rains, tornadoes, and deadly floods.

“I know that bracing for another storm while we’re still responding to, and trying to recover from, Hurricane Ida is not the position that we wanted to be in,” Mr. Edwards said. “But it is a situation that we are prepared for.”

He added that “life-threatening flash flooding due to very heavy rainfall will be the primary concern.”

Nicholas formed on Sunday in the Gulf of Mexico, the 14th named storm of the 2021 Atlantic hurricane season.

At 8 p.m. Central time on Monday, the storm was moving north-northeast at about 12 miles per hour, with maximum sustained winds near 70 m.p.h.

It has been a dizzying couple of months for meteorologists as the arrival of peak hurricane season — August through November — led to a run of named storms that formed in quick succession, bringing stormy weather, flooding and damaging winds to parts of the United States and the Caribbean.

Tropical Storm Mindy hit the Florida Panhandle on Sept. 8, just hours after it formed in the Gulf of Mexico. Hurricane Larry, which formed on Sept. 1, strengthened to a Category 3 storm two days later and then weakened. It struck Canada as a Category 1 hurricane and caused widespread power outages in Newfoundland.

Ida battered Louisiana as a Category 4 hurricane on Aug. 29 before its remnants brought deadly flooding to the New York area. Two other tropical storms, Julian and Kate, both fizzled out within a day at the same time.

Not long before them, in mid-August, Tropical Storm Fred made landfall in the Florida Panhandle and Hurricane Grace hit Haiti and Mexico. Tropical Storm Henri knocked out power and brought record rainfall to the Northeastern United States on Aug. 22.

The links between hurricanes and climate change are becoming more apparent. A warming planet can expect to see stronger hurricanes over time, and a higher incidence of the most powerful storms. But the overall number of storms could drop, because factors like stronger wind shear could keep weaker storms from forming.

Hurricanes are also becoming wetter because of more water vapor in the warmer atmosphere; scientists have suggested storms like Hurricane Harvey in 2017 produced far more rain than it would have without the human effects on climate. Also, rising sea levels are contributing to higher storm surge — the most destructive element of tropical cyclones.

A major United Nations climate report released in August warned that nations had delayed curbing their fossil-fuel emissions for so long that they could no longer stop global warming from intensifying over the next 30 years, leading to more frequent life-threatening heat waves and severe droughts. Tropical cyclones have likely become more intense over the past 40 years, the report said, a shift that cannot be explained by natural variability alone.

In May, scientists with the National Oceanic and Atmospheric Administration forecast that there would be 13 to 20 named storms this year, six to 10 of which would be hurricanes, and three to five major hurricanes of Category 3 or higher in the Atlantic. In early August, in a midseason update to the forecast, they continued to warn that this year’s hurricane season would be an above-average one, suggesting a busy end to the season.

NOAA updated its forecast in early August, predicting 15 to 21 named storms, including seven to 10 hurricanes, by the end of the season on Nov. 30.

Last year, there were 30 named storms, including six major hurricanes, forcing meteorologists to exhaust the alphabet for the second time and move to using Greek letters.

Katrina Kaif shares adorable photo as she bids goodbye to Cappadocia, Turkey. Check out her post