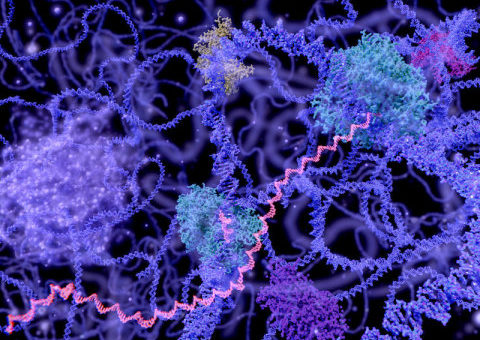 Researchers from the group of Marvin Tanenbaum at the Hubrecht Institute have shown that translation of the genetic information stored in our DNA is much more complex than previously thought. This discovery was made by developing a type of advanced microscopy that directly visualizes the translation of the genetic code in a living cell. Their study is published in the scientific journal Cell on June 6th.

From gene to protein

The ‘reading frame’ of genes

The genetic code is translated in groups of 3 letters, each resembling a word, which is translated into a single part of the protein. If a ribosome starts translating the code at the wrong position, a shift in the 3-letter-code can occur. For example, the sentence below should read:

However, if a ribosome starts translating this sentence one letter too late, the sentence would read:

In the case of the genetic code, this phenomenon is called ‘out-of-frame’ translation. Sanne Boersma, researcher at the Hubrecht Institute explains: “As illustrated by the example sentence, out-of-frame translation has a big effect on the protein and usually results in a protein that behaves differently and can damage the cell.” Until now, it was unclear how the ribosome knows where to start translating the code, and how often the ribosome gets it wrong.

The researchers developed a new method to visualize the decoding of our genetic information in living cells. They were able to label different protein products in different colors and visualize the production of each type of protein using advanced microscopy. Each protein was labeled using a specific label, or tag, called the SunTag and MoonTag, which they could see through the microscope. By combining the MoonTag and the SunTag, the researchers could now see for the first time how often out-of-frame translation takes place.

The researchers discovered that out-of-frame translation happens surprisingly frequently. In extreme cases, almost half of all the proteins that were built, used a different reading frame or code than the expected code. These surprising findings show that the genetic information stored in our DNA is far more complex than previously thought. Based on the new study, our DNA likely encodes thousands of previously unknown proteins with unknown functions. Sanne Boersma: “Because of our study, we can now ask very important questions: what do all these new proteins do? Do they have important functions in our body or are they waste side-products of translation that can damage our cells?”

Materials provided by Hubrecht Institute. Note: Content may be edited for style and length.

Films like ‘Cake’ and ‘Laal Kabootar’ have given hope to parallel cinema: Mohib Mirza

Benefits Of Clove: How To Make Clove Tea For Weight Loss, Immunity And Diabetes Management
2019-12-09