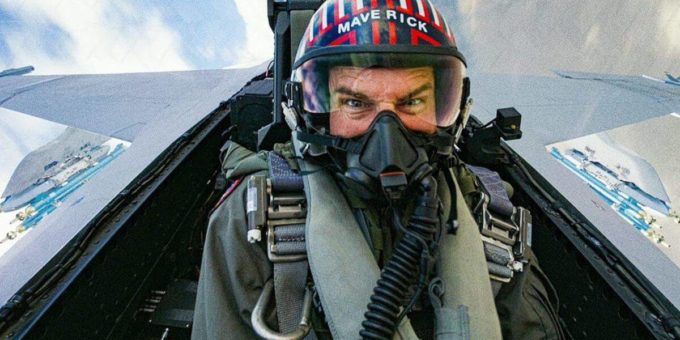 Thirty-six years ago, someone told him, “Son, your ego is writing cheques your body can’t cash”. Oh, how wrong they were.
Here it is, Tom Cruise again, that body still commanding some serious cash – as it maxes the Machs, aces the skies, burns the roads, tops the tops and guns the guns, slaying it still in that bomber jacket and those Aviators. Of course, the age shows, the Botox slips, and some close-ups are more painful than the others. However, trust your heart more than your eyes, for there are few who have ever occupied that cockpit better.

Pete ‘Maverick’ Mitchell is flying still, having forestalled promotions to senior positions such as Admiral for a lowly — “but much decorated” — ‘Captain’, to be able to continue doing that. Having pulled off another one of his stunts, to an exasperated senior played by Ed Harris, he is packed off with a chiding to the Top Gun academy. He is to train the top graduates of that gruelling training centre, which he once famously attended, for a super risky mission.

The twist in the tale is that one of the pilots shortlisted is Bradley ‘Rooster’ Bradshaw (Teller), the son of ‘Goose’. Yes, the very same wingman and Pete’s best friend who died in a crash for which Pete a.k.a Maverick can never forgive himself. That is the emotional core of the film, how Maverick handles Rooster, even if it takes a while getting there.

However, that’s not to say the ride is not enjoyable. Someone recently wrote how the first film “was not as good as you probably remember it”. And really, it wasn’t, with its man boys playing big boys with impressive toys. But for its dizzyingly well-shot dogfights and some very handsome bods captured in shower towels and beach volleyballs, goofing around, Top Gun could have spun out of control for its underwritten screenplay. The US Navy’s enthusiastic support didn’t hurt, returned in kind by enthusiastic youngsters who signed up to enrol in it at booths set up in movie halls.

Top Gun: Maverick makes up for that flaw by putting together a much more compelling narrative, with a genuinely dangerous, time-bound mission. It also captures pretty niftily the preparation for it, and the toll it has on pilots’ bodies, as they fly lower than they ever have, twisting and turning through canyons, hit a target, and then go straight vertically up. There is both cohesion and tension here.

If Top Gun: Maverick seems a little too bathed in sepia at first, the glory of the 1986 film, its antagonisms and relationships, and even its songs (Highway to the Danger Zone or Great Balls of Fire) written all over it, director Kosinski eventually manages to round the circle between the past and present very well. Even the ailing Kilmer’s brief re-appearance as ‘Iceman’ from the 1986 film has a nicely nostalgic touch to it.

Of course the film is riding on Cruise’s still nimble shoulders, that sparkly grin, and his charm burnished with years of stardom. However, there is a settling down too, a recognition of age, of passing years – whether it is Pete wistfully looking on at the new top guns, including a woman pilot accepted as one of the boys, at a bar; or him choosing to take a seat half-way through a volleyball game, to take a breath and look lovingly on.

Teller is almost too much like Anthony Edwards’s Goose, and doesn’t have much to do. But in the little he has, he is reassuringly good. Hamm’s is the other part with some meat on it, which largely comprises his Admiral shouting at Maverick.

That can be a little disconcerting, seeing Maverick, now 50-odd, still getting the same dressing downs as his rash younger self did – even if rule-bending remains his calling card.

The most disappointing parts in the two Top Gun iterations involve Penny (Connelly), Pete’s love interest. This Penny drops into shoes once occupied by the classy Kelly McGillis. But where McGillis’s Charlie had a serious role in Navy’s aviation set-up as well, in a way as Pete’s senior, Penny is here only to look admiringly on and applaud Pete as he pulls off yet another stunt.

If one frowning officer told Pete all those years ago to only write cheques one could encash, another frowning topshot tells him this time: “The future is here, and it doesn’t include you.”