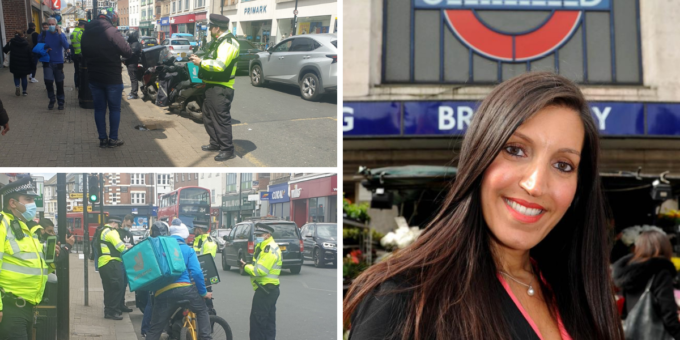 A Tooting MP has spoken out in criticism of a joint operation by Met Police and the Home Office, targeting food delivery drivers

In a series of tweets, the MP criticised busts carried out yesterday which culminated in the arrest of two foreign nationals.

Rosena Allin-Khan said “racial profiling” had been allowed under the “guise” of Covid compliance.

But a Home Office spokesperson defended the operation, saying it came as a result of intelligence and was not conducted randomly.

Met Police carried out the operation on Tuesday afternoon (May 18) in partnership with Immigration Enforcement.

Officers stopped 48 bikes in a 90 minute-period and arrested two drivers on immigration offences, a Moroccan and an Indian national.

Following numerous complaints about fast food delivery riders we conducted an operation in #tooting this afternoon with immigration enforcement.
In 90 mins we stopped
48 bikes.
2 were seized for no insurance
3 riders reported for offences
2 x arrests for immigration offences pic.twitter.com/nOOBMlY1Xl

In a series of tweets, Dr Khan said it was unnecessary for Immigration Enforcement to be in attendance.

The Tooting MP said: “I don’t think there’s been full transparency with the public about the reasons for conducting such an operation – and I certainly disagree with police time being used to prop-up the Home Office’s hostile environment policies.

“This looks like racial profiling and I am concerned that under the Equalities Act 2010, this may amount to indirect discrimination due to its disproportionate impact on ethnic minority groups. If it’s not unlawful, then it’s definitely immoral and I cannot defend it.

“Tooting is a welcoming place. The celebratory nature of the police tweet is not in keeping with our local values. I’ve requested a meeting with the police to explain their actions and would encourage them to focus their time on fighting crime – not targeting people at work.”

However, the Home Office pointed towards a national operation that targets foreign nationals using false documents to obtain employment as delivery drivers.

A spokesperson said:  “It is completely false to claim that any immigration activity is conducted under false pretences. All operational activity is intelligence led.

“The Government continues to tackle illegal migration in all its forms and our New Plan for Immigration will speed up the removal of those who have entered the UK illegally.”

Khloe Kardashian: I’m Using My Privilege to Fight for Black People, and You Should Too!
2020-06-02