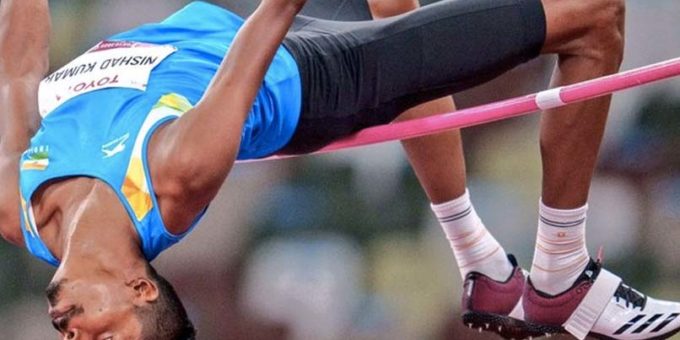 After winning a silver medal in the high jump event of the ongoing Tokyo Paralympics, Nishad Kumar on Sunday said that he wishes his win encourages more para-athletes to follow their passion. “I am very happy after winning a silver medal at the Tokyo Paralympics. I want to thank the Sports Authority of India and the Prime Minister. I have gotten the desired support from everyone. PCI has always helped me, I am ecstatic after winning the medal,” Nishad told ANI.

“I hope this medal has made everyone proud and I hope it encourages more para-athletes to follow their passion,” he added.

Kumar clinched the silver at the high jump event, creating a new Asian record of 2.06m and marking the second silver for India.

USA’s Roderick Townsend won gold while Dallas Wise shared the second spot with Nishad. Townsend made the jump of 2.15m while Wise recorded a jump of 2.06 m. Nishad and Wise both finished on the same mark, but Nishad had crossed the 2.02 mark in his first attempt while Wise took two.

India’s Rampal Chahar finished at the fifth spot with a jump of 1.94m.

Earlier in the day, India’s para table tennis player Bhavinaben Patel won silver as she lost the gold medal match to China’s Zhou Ying 3-0 in the women’s singles – Class 4 in the ongoing Tokyo Paralympics on Sunday.

With this silver medal, Bhavinaben became the first table tennis player ever to win a medal at the Paralympics for India and the second female athlete after PCI chief Deepa Malik to achieve this feat. Deepa had won silver at Rio 2016 in women’s shot put.

Sanjay Dutt banking on KGF 2 as his comeback, preparing for combat : Bollywood News
2020-03-25