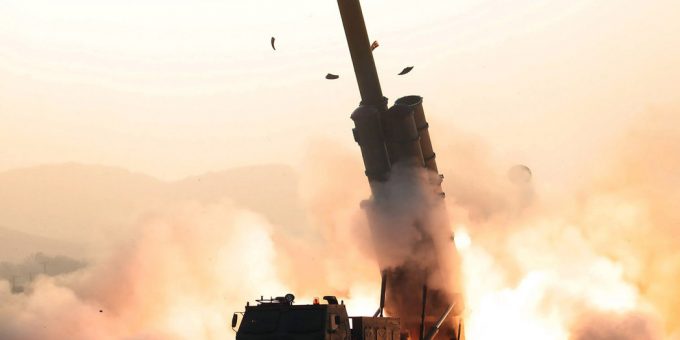 Kim Jong-un, North Korea’s leader, has said that the United States has until the end of the year to make a new proposal to create a breakthrough in stalled negotiations on denuclearizing the Korean Peninsula.

The looming deadline — which North Korea has issued repeated warnings about — carries the implicit threat that the country could return to its alarming behavior of the past by ending its self-imposed moratorium on nuclear tests and launching long-range missiles capable of hitting American cities. On Thursday, it launched two short-range rockets, its 13th rocket or missile test since May.

“Today, we sit on top of a live volcano,” said Robert L. Carlin, a former nuclear negotiator at the State Department and longtime North Korea observer, describing a rapidly deteriorating situation on the peninsula during a lecture this month at Yonsei University in Seoul, the South Korean capital. “We don’t have a lot of time to back away.”

In the past month, North Korea has warned that the Trump administration should not even “dream of” discussing denuclearization without first ending its “hostile” policies, including smothering economic sanctions. It swore “shocking punishment” if Washington were to ignore the year-end deadline.

Senior American diplomats do not appear to share that urgency. To them, it’s just posturing.

“I don’t remember a time limit being set. Is this the North Koreans?” David R. Stilwell, assistant secretary of state for East Asian and Pacific affairs, told reporters in Tokyo last month, admitting to being unaware of the deadline. “But I would say that the North Koreans do one thing a lot, and that’s bluff.”

When Washington has addressed the January deadline, it has called it an “artificial” time limit. And that leaves analysts fearing the outbreak of another crisis on the Korean Peninsula.

North Korea has not been explicit about what might happen after Dec. 31, except that Mr. Kim has warned of finding a “new way” if Washington persists with sanctions and tries to force an unpalatable denuclearization deal.

Some analysts say the deadline shows how badly Mr. Kim wants a deal so that he can finally deliver on a promise to his people to lift sanctions and rebuild ​the country’s ailing economy. North Korea’s increasingly urgent statements in recent weeks are designed to pressure Washington to return to the negotiating table with a more flexible proposal, they say.

“The North Koreans are telling the United States: ‘We will have to do something very bad unless you do something for us by the end of the year, so please help us stop ourselves,’” Kim Hyung-ki, a former vice unification minister of South Korea, said during a forum in Seoul last month.

Mr. Kim’s “new way” could mean resuming tests of nuclear devices and intercontinental ballistic missiles, or ICBMs, analysts say. Mr. Trump has often bragged about the testing moratorium, citing it as his biggest achievement in his on-off diplomacy with Mr. Kim. Recently, the United States and South Korea decided to postpone a joint air force exercise that has alarmed the North.

If North Korea launches another long-range missile, it will set off more United Nations sanctions. It would also invite harsh reaction from Washington, perhaps even a return to the type of “fire and fury” threats Mr. Trump once used as the United States and North Korea appeared to be hurtling to the brink of war.

With its increasingly strident demands in recent weeks, North Korea is playing a delicate game in denying itself an escape hatch from Mr. Kim’s year-end deadline. And it comes as Washington is consumed by the impeachment hearings, which limits Mr. Trump’s room for diplomacy with the North.

That combination makes the situation volatile, escalating the risk that either side could miscalculate, officials and analysts worry.

“We could see a possibility of going back to some of the more provocative steps that preceded the start of this diplomacy,” Stephen E. Biegun, Washington’s special representative for North Korea, said last week during a confirmation hearing on his nomination as deputy secretary of state. “I think that would be a huge mistake and a missed opportunity by the Democratic People’s Republic of Korea.”

Other analysts say Mr. Kim would most likely first take actions that do not breach the moratorium on nuclear or long-range missile tests but would still deliver a strong message to Washington. That could include restarting plutonium-producing nuclear reactors in Yongbyon, about 60 miles north of Pyongyang, the capital, or launching short- or medium-range missiles.

A nuclear or ICBM test would also provoke China at a time when Mr. Kim needs its help more than ever to blunt the pain of international sanctions. Last year, 1.2 million Chinese tourists visited North Korea, a 50 percent increase from 2017, providing badly needed cash for Pyongyang, according to the Korea Trade-Investment Promotion Agency in Seoul, citing Chinese customs data.

If Mr. Kim ends his diplomacy with Mr. Trump, he could, at least in the short term, “muddle through with the help of China,” said Lee Jung-chul, a North Korea expert at Soongsil University in Seoul. “It will be difficult for the North to attempt a provocation, given the importance of its relations with China.”

North Korea has not specified what it seeks in demanding that Washington drop its “hostile policy.” It has long indicated that it wants international sanctions lifted and an end to joint military exercises between the United States and South Korea. In the past, it has also called for the United States to end its military presence in and around South Korea.

But in recent statements, North Korea has only hardened its demands, further dimming the prospects for dialogue.

It said it had already taken enough confidence-building steps, such as the test moratorium, the shutting down of its underground nuclear test site and its return of American remains from the Korean War. It said Mr. Trump should expect no more gifts “he can boast of” and that he should instead keep the promises he made in his Singapore summit meeting last year with Mr. Kim, like ending regular joint military exercises with South Korea that the North sees as war preparations.

Analysts worry that with talks having stalled, North Korea will continue to produce more nuclear fuel and warheads. As its nuclear arsenal increases, the cost of denuclearization continues to rise.

“You might argue, how can we reward a bad guy like North Korea?” said Jun Bong-geun, acting president of the government-run Institute of Foreign Affairs and National Security in Seoul. “But sanctions and pressure alone have never worked on North Korea. You also have to offer incentives.”