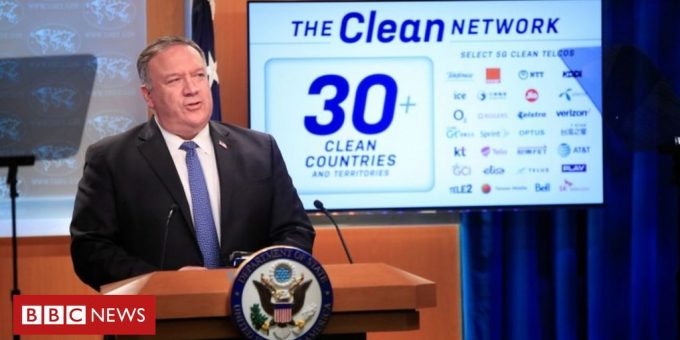 US Secretary of State Mike Pompeo has outlined the steps he wants US companies to take to deal with “untrusted Chinese apps”.

The measures go far beyond President Donald Trump’s current push to force the sale of TikTok to an American firm.

Wednesday’s announcement marks a further deterioration in relations between Washington and Beijing.

The US government argues that such apps harvest the data of US citizens and could be exploited by the Chinese Communist Party, which Beijing has denied.

One of the significant steps involves the removal of “untrusted” Chinese apps from US app stores, along with clamping down on cloud computing providers.

Along with the Chinese telecoms giant Huawei, TikTok has been firmly in the sights of US President Donald Trump as two companies he wants to crack down on.

The scope of those measures has now been extended much wider and includes Chinese technology giants such as Alibaba, Baidu and Tencent, which have a presence in the US.

Mr Pompeo, who is America’s most senior diplomat, set out a five-pronged approach to “safeguard America’s assets” that include:

· Stopping “untrusted” Chinese smartphone manufacturers from pre-installing, or making available for download, the most popular US apps

It is unclear how the US would enforce the new guidelines or what authority it has to do so. But Mr Pompeo said more than 30 countries now had “clean networks” which are designed to secure a country’s critical telecommunications.

Mr Trump has pledged to ban TikTok in America by 15 September unless its US business is sold to an American company. Microsoft is currently in talks to buy it.

TikTok, which is owned by Chinese tech firm ByteDance, has said its US users’ data is stored outside China and is safe.

US officials have long complained that Chinese intellectual property theft has cost the economy billions of dollars in revenue and thousands of jobs, which Beijing has consistently denied.

Last month, Mr Pompeo said the US was looking at banning TikTok as well as other Chinese social media apps on national security concerns, calling them “Trojan horses for Chinese intelligence.”