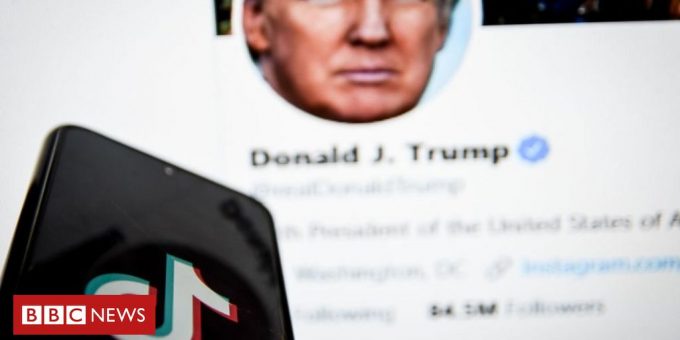 Under the orders, US firms must stop doing business with the companies within 45 days.

The move marks a major escalation in Washington’s confrontation with Beijing over China’s power in global technology.

The announcement comes as Microsoft is in talks to buy TikTok ahead of a 15 September deadline set by Mr Trump.

The executive orders against the short-video sharing platform TikTok – owned by Chinese firm ByteDance – and the messaging service WeChat – owned by the Tencent conglomerate is the latest measure in an increasingly broad Trump administration campaign against China.

Earlier on Thursday, Washington announced recommendations that Chinese firms listed on US stock markets should be delisted unless they provided regulators with access to their audited accounts.

What did Trump say?

In both executive orders, Mr Trump says he has found “additional steps must be taken to deal with the national emergency with respect to the information and communications technology and services supply chain”.

He adds: “The spread in the United States of mobile applications developed and owned by companies in the People’s Republic of China (China) continues to threaten the national security, foreign policy, and economy of the United States.”

He refers to both apps as a “threat”. Both orders say any unspecified “transactions” with the apps’ Chinese owners or their subsidiaries will be “prohibited”.

The text of Mr Trump’s order says TikTok’s data collection could allow China to track US government employees and gather personal information for blackmail, or to carry out corporate espionage.

He notes that reports indicate TikTok censors content deemed politically sensitive, such as protests in Hong Kong and Beijing’s treatment of the Uighurs, a Muslim minority.

The US president says the Department of Homeland Security, the Transportation Security Administration (which oversees US airport screening) and the US Armed Forces have already banned TikTok on government phones.

ByteDance and Tencent have declined so far to comment.

The TikTok ban is hardly a surprise, as the app has faced scrutiny in the US for months. But the almost identical ban on WeChat is more of a bombshell.

Immediately after President Trump’s executive order was announced, I received a flood of messages on my WeChat. Friends in America and their loved ones in China were in an absolute panic.

They are thousands of miles apart but asking the same question: How are we supposed to keep in touch after WeChat is banned in the US?

It’s nearly impossible to avoid WeChat for those who have any connections to China.

America’s move to block WeChat, a prominent example of China’s tech innovation, will be seen as an attack on its culture, its people and the state. It’ll enhance the popular view in China that Washington is unreasonably suppressing its biggest competitor in technology.

If the ban is fully enforced, it’d be a disaster for anyone who has families, friends or a business in China.

While tit-for-tat has become the new normal in US-China relations, this move will cut off virtually all people-to-people communication between the world’s two most influential countries.

Since Mr Trump vowed last Friday to ban TikTok, tech giant Microsoft has said it is in talks to acquire the Chinese app’s US operations.

Mr Trump said this week he would support the sale to Microsoft as long as the US government received a “substantial portion” of the sales price – a demand that legal experts describe as highly unorthodox.

But he warned he would ban TikTok in the United States from 15 September.

The US government took action last year against two Chinese communications companies, Huawei and ZTE, including locking them out of government contracts.

Mr Trump has been waging a trade war against China and he blames the country for the global coronavirus pandemic, which has crippled the American economy, jeopardising the US president’s re-election prospects this November.

The fast-growing app – which has up to 80 million active monthly users in America – has exploded in popularity in recent years, mostly with people under 20.

They use the app to share 15-second videos that often involve lip-synching to songs, comedy routines and unusual editing tricks.

These videos are then made available to both followers and strangers. By default, all accounts are public, although users can restrict uploads to an approved list of contacts.

TikTok also allows private messages to be sent but this facility is limited to “friends”.

The app is reported to have around 800 million active monthly users, with its biggest markets having grown in the US and India.

Though as Mr Trump notes in his executive order, India has already blocked TikTok, as well as other Chinese apps.

WeChat is sometimes described as being a social network, but it’s really so much more – offering ways to make payments, run additional mini-programs, find dates and get the news, in addition to messaging and other social activities.

It is perhaps best thought of as being a kind of secondary operating system that sits on top of iOS or Android.

It is also viewed as being a key instrument in China’s internal surveillance apparatus – requiring local users who have been accused of spreading malicious rumours to register a facial scan and voice print.

But in addition, it is allegedly commonly used by the Chinese Communist Party to pump propaganda to the Chinese diaspora.

A seminar held earlier this year by the Australian Strategic Policy Institute think tank discussed how groups within the app would be used to recommend holiday destinations, restaurants and the like on a day-to-day basis, but then switch to spreading political messages in line with Beijing’s thinking at critical times.

Tetsuya Yamagami: What we know about the man suspected of shooting Shinzo Abe
2022-07-10