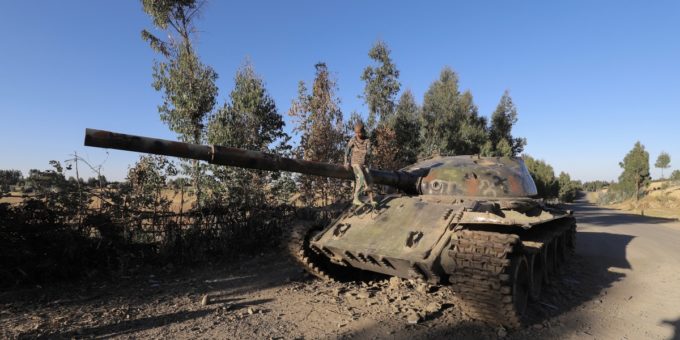 Tigrayan forces fighting the central government say they have withdrawn from neighbouring regions in northern Ethiopia, a step towards a possible ceasefire after 13 months of brutal war.

“We trust that our bold act of withdrawal will be a decisive opening for peace,” wrote Debretsion Gebremichael, the head of the Tigray People’s Liberation Front (TPLF), the political party controlling most of the northern region of Tigray, in a letter to the United Nations on Monday.

His letter called for a no-fly zone for hostile aircraft over Tigray, imposing arms embargoes on Ethiopia and its ally Eritrea, and a UN mechanism to verify that external armed forces had withdrawn from Tigray.

The conflict erupted in November 2020 between the federal government and the TPLF, which dominated Ethiopian politics for nearly 30 years before Prime Minister Abiy came to power in 2018.

Abiy, the 2019 Nobel Peace Prize laureate, promised a swift victory. His troops seized Tigray’s capital, Mekelle, in late November but by June, the Tigrayan forces had launched a counterattack that saw them retake much of their region and expand fighting into the neighbouring Amhara and Afar regions. At the end of November, the Ethiopian military began an offensive that pushed the advancing Tigrayan forces back hundreds of kilometres.

Getachew Reda, a spokesman for the TPLF, said the Tigrayan troops were pulling out of Amhara and Afar.

“We decided to withdraw from these areas to Tigray. We want to open the door to humanitarian aid,” Getachew said.

The decision to retreat to Tigray was made a few weeks ago, Getachew said, later tweeting: “We have just completed the withdrawal of our forces from both #Amhara&#Afar regions.”

But Abiy’s spokeswoman Billene Seyoum said the announcement was a cover-up for military setbacks.

“The TPLF have sustained great losses over the past weeks and hence are claiming ‘strategic retreat’ to make up for defeat,” she told the AFP news agency.

“There are still pockets in the Amhara region in which they remain as well as other fronts they are attempting to open the conflict.”

The war in Africa’s second-most populous nation has destabilised an already fragile region, sending tens of thousands of refugees into Sudan, pulling Ethiopian soldiers out of war-ravaged Somalia and using the army from the neighbouring nation of Eritrea.

Tens of thousands of people have been killed, about 400,000 are facing famine in Tigray, and 9.4 million people need food aid across northern Ethiopia as a result of the conflict.

Debretsion, the head of TPLF, said he hoped the Tigrayan withdrawal from Afar and Amhara would force the international community to ensure that food aid could enter Tigray.

“We hope that by [us] withdrawing, the international community will do something about the situation in Tigray as they can no longer use as an excuse that our forces are invading Amhara and Afar,” Getachew told the Reuters news agency.

Other proposals in the letter include the release of political prisoners – thousands of Tigrayans have been detained by the government – and the use of international investigators to pursue those responsible for war crimes.

Last week, the UN agreed to set up an independent investigation into rights abuses in Ethiopia – a move strongly opposed by the Ethiopian government.

International mediators, including the African Union and the United States, have repeatedly tried to negotiate a ceasefire between the two sides to allow aid to enter Tigray, but both sides refused until certain conditions were met.

The US said on Monday that it hopes the Tigrayans’ retreat to their northern stronghold “opens the door to broader diplomacy”.

“If we do see a movement of the Tigrayan forces back into Tigray, that is something we would welcome,” State Department spokesman Ned Price said. “It’s something we’d call for, and we hope it opens the door to broader diplomacy.”

Teklai Gebremichael, an Ethiopian writer who has been documenting the fighting, told Al Jazeera that the Tigrayan forces “have been stuck between a rock and a hard place”.

“The international community has been making enormous pressure on them to withdraw so that the Ethiopian government can be convinced into delivering aid because the Ethiopian government conditioned the delivery of aid on the Tigrayan forces withdrawing from Afar and Amhara regions, although they have to go there to pursue their enemies that would otherwise invade Tigray,” he said.

Given the possibility of another invasion, Teklai said Tigrayan forces were unlikely to disarm despite their retreat to Tigray.

“They know that disarming will mean that the Ethiopian and Eritrean government will invade Tigray the next day, and visit the kind of devastation they had when the Ethiopian and Eritrean forces were in Tigray last year. So I don’t think disarming is on the cards for the Tigrayan forces, because if they do that, that will be a dereliction of duty to protect the Tigrayan against the forces that have made it clear they will invade if there is an opportunity to do so.”