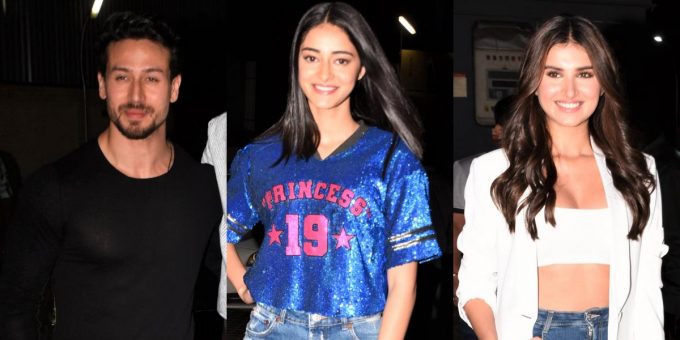 The much-awaited flick Student of the Year 2, directed by Punit Malhotra and produced by Karan Johar, is set to be released on the big screen this weekend! As it is a sequel to the successful blockbuster Student of the Year and features action star Tiger Shroff as well as newcomers Ananya Panday and Tara Sutaria, this is a film that has seen tons of hype and attention ever since its announcement. The film’s trailer promises plenty of action and high-intensity drama, with a love triangle relationship between the lead characters. Regardless, Student of the Year 2 is for sure a flick that people are going to be talking about.

In advance of its global release, a special screening of the flick was held in Mumbai. Members of the star cast and crew as well as their family and loved ones were invited to celebrate the impending release. Check out the celebs that attended!

Tiger Shroff was seen having to balance himself against railings due to his recent injury. He remained cheerful though and flashed a peace sign for the cameras.

Ananya Panday was dressed up in a cute sparkly jersey top with denim shorts and smiled brightly.

The actress posed sweetly with her little sister Rysa. The two sisters matched their outfits as both their tops had the emblem ‘Princess.’ Too cute!

The rest of the Panday family was also in attendance, including dad and actor Chunky Panday and mother Bhavana.

Ananya even took the time to take a shot with father-son duo Jackie and Tiger.

Tara looked feminine and graceful in a white crop top paired with a blazer.

Her twin sister and model Pia Sutaria came to show her support.

Karan Johar, the producer of the film and director of the original Student of the Year, showed up in his usual fashion fare of an oversized hoodie. The multicoloured tie-dye pattern brought a ton of fun to the look.

In Somalia, an intelligence officer's disappearance has blown open a government crisis – The Washington Post
2021-09-18