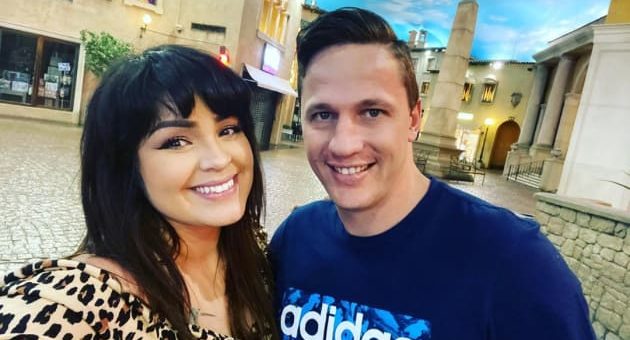 Early this year, it looked like Tiffany Franco and Ronald Smith were over for good after Ronald allegedly relapsed.


Now, the 90 Day Fiance couple appear to have reconciled. As happy as fans are, others say that the photos worry them.


In late January, Tiffany Franco and Ronald Smith’s beautiful story of love and family appeared to have been torn apart.


Though Ronald appeared to furiously accuse Tiffany of cheating, at the time she gently clarified the culprit behind their split.


She shared that Ronald had allegedly relapsed.


As fans are well-aware, Ronald has a gambling addiction.


This week, Tiffany and Ronald both shared photos of the two of them, back together for apparently the first time in over a month.


The married couple geotagged their photos as being in Montecasino, South Africa.


It looks like Tiffany crossed the Atlantis to see her husband and to patch things up in person.


We can only assume that, despite the fallout from their split in January, they spent a lot of time making peace online before she took this step.


Though Tiffany (probably wisely) turned off comments on her post, Ronald kept them open and we can see the responses of fans.


“Happy you’re back together,” gushes one fan in the comments.


“I’m very glad to see you two together,” another follower raves.


That same comment continues: “I hope you have a long and happy life.”


There has been no sign of Daniel or baby Carley Rose in these photos.


It is assumed that they were either not pictured or that Tiffany flew out on her own.


(Now is not an ideal time to travel; ticket prices may be low but anyone could get stranded overseas thanks to the coronavirus)


We mentioned earlier that some fans were deeply concerned by this reunion. The reason is simple.


Tiffany and Ronald were seen in Montecasino, a complex in Johannesburg, South Africa.


Given the name, many feared that Tiffany had for some reason decided to go on a date with Ronald, her gambling-addicted husband, at a casino.


Best case scenario, that would be some sort of sick test of his resolve.


Worst case scenario, it would mean that he had relapsed and that she was suddenly fine with it.


Well, as a number of South African fans in the comments explained, Montecasino has a casino in it, but that’s just one small part of it.


It also has restaurants and a movie theater.


We suppose that one could look at it like visiting Las Vegas.


Not everyone gambles there, but your hotel and restaurant options will probably technically be in casinos.


Honestly, we’re excited for Tiffany and Ronald — and for Daniel and Carley.


These two were one of 90 Day Fiance’s most recent and most adored couples. They were just so sweet together.


Tiffany made the difficult choice of flying back to the US with Daniel to have Carley, but she knew that it was the right thing for her kids.


It was always the goal to bring Ronald over, and fans hope to see them make that happen.