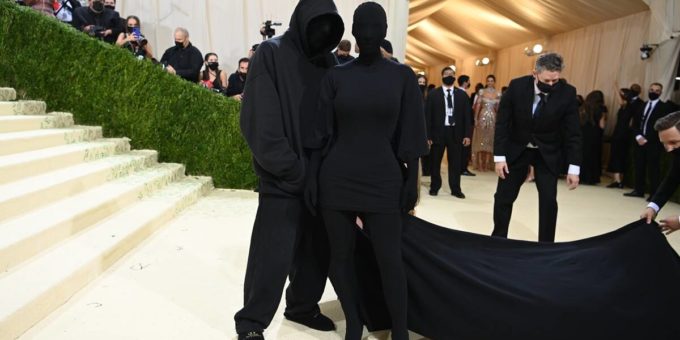 Demna Gvasalia and I meet in the metaverse, in a glassed-in conference room in an unnamed city. Though the buildings suggest Singapore by way of the Jetsons.

“This is kind of trippy,” said the avatar otherwise known as the creative director of Balenciaga, upon materializing in the room. “What do I have on? What kind of jacket? I bet it’s not oversized.”

He was wearing a black warm-up jacket and black T-shirt, with a silver chain around his neck, gold hoops in both ears, a black baseball cap and a five o’clock shadow. He looked, in other words, a lot like the real-life designer, who usually wears all black, a baseball cap and hoops — though the hoodie was perhaps not as voluminous as he may have liked, and his skin had the ageless perfection of a cartoon, though he is 40.

My outfit, on the other hand, apparently left something to be desired.

“Did you choose your avatar?” Demna (as he is now officially known; no last name) asked. I allowed that I had, but there were limited clothing options, most of which seemed straight from Talbots or Topshop. “You’re wearing a blue three-button polo,” Demna said. And giggled. Then he waved his arms around in front of his face a few times as if he couldn’t quite believe they were there. “I have to get used to this,” he said.

In reality, Demna was in Paris, in the Balenciaga offices where he spends a week a month. (The rest of the time he is at home outside Zurich, with his husband, Loïck Gomez, their two Chihuahuas, Cookie and Chiquita, and his collection of Princess Diana porcelains.) I was in Brooklyn.

And avatar me was interviewing avatar him face to face in cyberspace, only a few hours after the Balenciaga fall 2022 show had been revealed on the brand’s website as a time-traveling wormhole to an imaginary Balenciaga show from the 1990s, shot on VHS tape, like an artifact from an alternative past.

Fashion designer Demna Gvasalia at his home outside of Zurich, Switzerland. (Djamila Grossman for The New York Times)

During the pandemic, fashion talked a lot about disruption and changing the system and a fresh start. But few designers actually embraced the opportunity for creative destruction and reinvention quite like Demna.

In the last year, just after creating a VR show experience as well as a game, “Afterworld: The Age of Tomorrow,” Demna made a Balenciaga collection for “Fortnite,” the epic video game; dedicated a runway show to the notion of clones wherein one model wore every outfit, some of which “hacked” into sister brand Gucci (after Gucci had “hacked” into Balenciaga) by “stealing” (albeit with permission) its most recognizable designs and reinterpreting them; pulled a fast one on guests by turning a faux red carpet into a fashion show; and unveiled a Simpsons x Balenciaga cartoon about the transformative power of fashion as demonstrated by its effects on the people of Springfield, who generally could not care less about a French couture house.

On that subject: He also reintroduced couture to Balenciaga after a 50-year absence, although he made it for both men and women, dousing the building blocks of the basic wardrobe — T-shirts, jeans, bathrobes — with elegance and transforming them into entrance-making garments; went to the Met Gala for the first time, with Kim Kardashian; expanded the Balenciaga family to include Justin Bieber, Elliot Page and Isabelle Huppert; and (in his down time) was the creative director of Kanye West’s stadium-size “Donda” listening experiences in Atlanta and Chicago.

In doing so, he established Balenciaga as the brand most effectively channeling the complicated tension between technology and nostalgia, elitism and accessibility, that defined 2021. It is now the third biggest brand in the portfolio of Kering luxury group, after Gucci and Yves Saint Laurent, according to François-Henri Pinault, the chairman and CEO of Kering.

The underground upstart from Georgia in the former Soviet Union who made his name at Vetements, aggressively thumbing his nose at the establishment and all its pretensions, had suddenly become its prophet. There’s a reason that, when Facebook rebranded itself, the brand it tweeted at for fashion advice on what to wear in the metaverse was Balenciaga.

Even Demna, who says he is his own worst judge — “my therapist thinks that, too” — acknowledged that this year was a turning point. “A new era,” he said. Pinault called it his “second chapter.”

The first chapter encompassed the five years after he took over Balenciaga, though the prelude involved flight to Düsseldorf from Georgia with his family during that country’s civil war; a master’s degree from the Royal Academy of Fine Arts in Antwerp; stints on the design teams of Maison Martin Margiela (his most formative influence) and Louis Vuitton; and, in 2014, founding Vetements with his brother, Guram, as a “design collective.”

In only a year Vetements had sufficiently captured the attention of the fashion industry for Demna to win one of its most coveted prizes, the design reins of Balenciaga, an appointment that prompted cries of shock! horror! among critics who dismissed him as a streetwear designer who had somehow sneaked into the temple of Cristóbal.

At the beginning of the lockdown, when offices closed and everyone was sent home, Demna went into a pajama-shaped funk. “I really questioned what’s the point,” he said. Dressing up pulled him out.

“I essentially had a fashion week at my place,” he said. “I never worked so much on my own personal looks. A few times I would make looks that I would never dare to wear normally: super metalhead or goth or something quite fitted, even though I never wear fitted clothes in life because I have issues with my body.”

In doing all that, he said, “the joyfulness, the playfulness of fashion, really made me realize how much I love fashion and how much I love my job. My mission is to give people the best ingredients I can to create your own character and have fun with it. That’s what fashion is about. I cannot do anything else better than that.”

And he’s not just making clothes — the clothes don’t change a lot from season to season — but social criticism. The “Clones” spring 2022 collection was comment on the way influencers, fast fashion and sneakers everywhere have flattened self-expression. “Red Carpet,” for summer 2022, commented on celebrity and social media. The ’90s collection for fall 2022 was comment on nostalgia for a time when connection wasn’t technological in nature. The point is to force people to interrogate their own choices.

This is also the point of his friendship with West. The two men have known each other for six or seven years but developed an intense texting and WhatsApp relationship about two years ago, which culminated in the “Donda” shows.

“With Ye, I have something that I don’t really have with other people, where anything is possible,” Demna said. “For me, talking with him is like going back in time to the 8-year-old me who doesn’t have all these barriers and filters. We spent like 2 1/2 hours talking about buttons. Those kinds of conversations help me to evolve as a designer because I think: ‘Yeah, why do we do it like this? Why buttons? Why packaging?’ I never thought about that before.”

If last year’s ready-to-wear shows were a conceptual leap forward, the couture was the aesthetic turning point. Demna used the oldest, most elite form of fashion to convey an unpretentious modernism, shutting down claims that products like haute Ikea bags and Crocs stilettos were an easy, if not cheap, gimmick. (They are kind of a gimmick but a gimmick with a point that has to do with challenging notions of value and authenticity.) It showed he could make a pattern as well as observe one.

Couture also brought Demna to the Met Gala, the sort of celeb-studded event he had previously avoided. Kardashian was his date, and they wore matching black from head to toe, so both of them seemed like shadows of themselves. While hers was a comment on her ubiquity as a symbol of the social media age, a sort of cameo silhouette for the 21st century, his was a disguise.

“I don’t believe in fashion having to be different every time to be exciting,” Demna said. “I believe if I work on an oversize jacket one season to another, it just evolves and becomes better. But the moment I feel comfortable, I want to go elsewhere, and what brings me out of my comfort zone is going to public events. That’s why I wore the mask. I felt so uncomfortable having pictures of me that I wouldn’t like and could never get rid of.”

The experience directly inspired the red carpet show, in part because it made him question the assumptions we make about fame and who qualifies. He loved that afterward some of his models, who were otherwise unknown, were treated with the same frenzied enthusiasm as ASAP Rocky.

Pinault believes Balenciaga is poised to be the next “megabrand.” It has already passed the billion-euro revenue mark, he said, and is edging very close to 2 billion. Cédric Charbit, the CEO of Balenciaga, called it “a platform where anything is possible.”

How far do they want it to go? In the metaverse, the Demna avatar gazed bright-eyed out at the view through the fake conference room windows. “Everywhere,” he said.