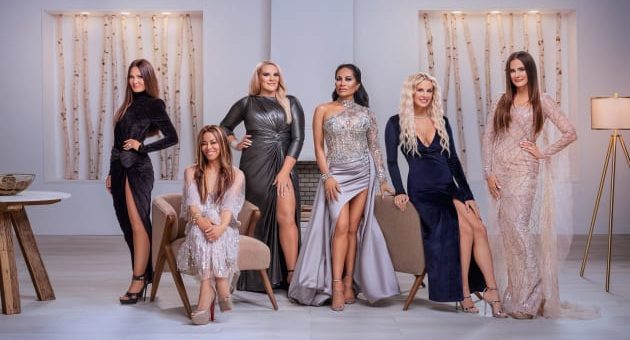 Jen Shah just got arrested for her role in a nationwide telemarketing scheme.


On television, at least.


The controversial cast member was front and center on The Real Housewives of Salt Lake City Sunday night, as she and her fellow Bravo personalities were boarding a bus for a trip to Vail…


… only for Shah to get a phone call.


She hung up and then claimed that her husband had been hospitalized for internal bleeding so she had to leave ASAP.


But then members of Homeland Security showed up, looking for Jen.


Heather Gay, Lisa Barlow, Whitney Rose and Jennie Nguyen chose to continue on with their vacation… wondering the entire time what was going on.


“Other than our families, there was 7 people that knew we were meeting at Beauty Lab today,” Lisa said, curious how authorities knew where to track down Shah.


“I can’t imagine anyone here would turn Jen in, but this looks really sus.”


As the installment continued, the women talked about Jen’s ordeal — withh Lisa asking Whitney if she knew something that she wasn’t telling the other ladies.


“I don’t know anything, but I have a lot of questions around, like, Jen’s lifestyle. It intrigues me where she gets all of her money and all of her things from.”


Rose later admitted to Heather during a pit stop, though, that she felt like Lisa was “guilty of something” because had called all six of her lawyerrs.


Could she have topped off the feds?


Shah is accused of lying to senior citizens around the country about potential (fake) business opportunities, passing their information along and then profiting massively from this scam.


She faces 50 years in prison.


“All I can think about is their families and how this is going to takeoff like wildfire,” Heather said in a confessional. “I’m absolutely gut-punched that Jen may be involved in this.”


As for Meredith Marks, who organized the trip and was waiting for her pals in Vail?


“Too many things didn’t add up and I’ve suspected that something was going on for a while,” she said via FaceTime.


“And now, it’s validated that I was right [and] I’m not crazy. That’s the bottom line.”


Such a response prompted Meredith’s castmates to ask why she was “unfazed” and ask whether she turned Shah in to the cops.


“I have been traumatized and terrorized — me, my family, my business — for almost two years by this women, and I just waiting quietly because I don’t point my fingers when I don’t have the facts,” Meredith told Mary in Colorado.


“And you know what? This now suddenly adds up.


Once the women arrived in Vail and sat down for dinner, Whitney then her co-stars that someone had sent her a message that said authorities allegedly had a tracker on Jen… which is what made them able to find her and arrest her on the side of the road.


So perhaps no Real Housewife of Salt Lake City was to blame for getting Shah in trouble?


Especially when Shah’s own alleged actions are really to blame.


Jennifer Shah, who portrays herself as a wealthy and successful businessperson on ‘reality’ television, and Stuart Smith, who is portrayed as Shah’s ‘first assistant,’ allegedly generated and sold ‘lead lists’ of innocent individuals for other members of their scheme to repeatedly scam.


In actual reality and as alleged, the so-called business opportunities pushed on the victims by Shah, Smith, and their co-conspirators were just fraudulent schemes, motivated by greed, to steal victims’ money.


Now, these defendants face time in prison for their alleged crimes.