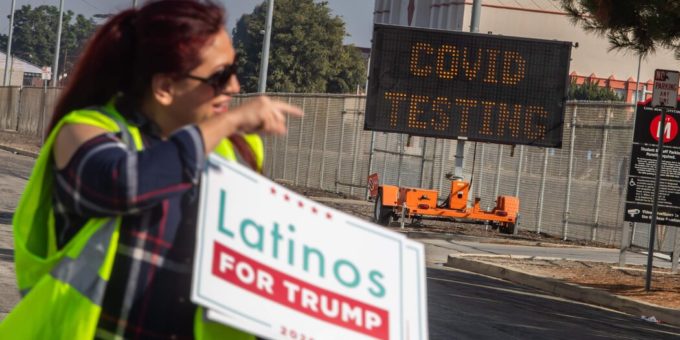 If there’s one thing California’s electorate can teach us, it’s that — even in a deep blue state like ours — it’s unwise to make generalizations about voters from any community. Exhibit A: Latinos.

My colleague Jennifer Medina has spent much of the past year talking to and writing about many of the 32 million eligible Latino voters across the country.

Most recently, she explored why Hispanic evangelical voters have found themselves politically homeless and how, for some Latino men, the president has a macho appeal. (She also hosted this episode of The Daily about Arizona’s divided Latino vote.)

I asked Jenny more about what she’s learned:

What do you see as the most persistent misconceptions about Latino voters?

First, and this can’t be overstated: Let’s get rid of the notion of the sleeping giant. What this cycle has made clear is that Latinos are very eager to engage with campaigns that are ready to engage with them.

We saw this with the Sanders campaign during the primary, especially in California and Nevada, where Latinos helped fuel his victory. But we are also seeing evidence of that with the Trump campaign — more on that in a second.

The Biden campaign has received a lot of criticism for not doing enough early enough to reach out to Latino voters, though it is now trying to make up for any lost ground.

The conventional wisdom in Democratic circles for years has been that nothing will unite Latinos like Donald Trump, with his rhetoric demonizing immigrants and policies designed to keep new migrants from entering the country.

But that gets at two faulty assumptions: First, though immigration is a key issue for many Latino voters, polls suggest it is not the top issue for a majority of them. Latino voters often rank education and the economy as even more pressing — and now the pandemic often tops the list.

And, second, back to Trump: The Trump campaign has put considerable effort into reaching out to Latinos, particularly in South Florida, but also in Nevada, Arizona, and yes, in California. Polls consistently show that roughly 25 to 30 percent of Latino voters say they plan to vote for the president.

[R.S.V.P. for a discussion, featuring Jorge Ramos, anchor of Noticiero Univisión and a contributing Opinion writer to The Times, about the power of the Latino vote.]

Latinos are not a monolith, obviously. That being said, are there large-scale shifts taking place in the Latino electorate that cut across geography? How do Latino voters in California fit into that picture?

The pandemic has, of course, changed everything.

I have seen public and private polling suggesting that Latinos are even more likely than white voters to see that as the top issue now. Coronavirus infections and deaths have disproportionately hit Latinos all over the country, including in California.

And so has the economic crisis. For months, Mr. Trump boasted about historically low unemployment rates among Latinos, but now so many people have lost jobs or seen their wages reduced.

At the same time, many experts project record turnout among Latinos, with the same kind of surge in voting we saw during the 2018 midterms. And this year, for the first time, Latinos are projected to be the largest nonwhite voting bloc.

What will you be watching on Election Day itself? What questions do you hope to answer? (Do you know where you’ll be reporting from yet?)

I expect to be in Arizona, the most important battleground state in the West. It’s possible we won’t be able to answer any questions on Election Day because we may not have a result.

But there are a lot of issues to watch for all over the country: How long are the lines? Are they in largely Black and Latino communities? Are there reports of voting machine problems?

And, again, most importantly: Will we have a definitive winner? As many California voters may know by now, Election Day does not mean election results. So just as early voting started weeks ago, vote counting could go well past Nov. 3.

[See The Times’s full voter guide for Californians, with information about how, when and where to cast your ballot.]

An update on the state’s coronavirus vaccine plan

California will have its own independent panel of experts review any federally approved coronavirus vaccines before they are administered to residents, Gov. Gavin Newsom said on Monday.

“Of course we won’t take anyone’s word for it,” he said. He emphasized that the “second set of eyes” on potential vaccines comes as part of the state’s broader efforts to make sure that vaccines get equitably distributed to communities that are most vulnerable.

[Read more about health equity in the pandemic.]

While Mr. Newsom acknowledged that the vaccine-approval process had been politicized, he said, “It doesn’t matter who the next president is, we’re going to maintain our vigilance.”

The announcement came after Gov. Andrew Cuomo of New York said the state would also review vaccines approved by the federal government — although Mr. Cuomo directly tied the move to doubts raised when President Trump suggested that he would reject tougher F.D.A. guidelines.

This week, Mr. Cuomo, as head of the bipartisan National Governors Association, posed additional questions about how the Trump administration will ensure that states are able to get and distribute vaccines.

[Track the progress of vaccine trials.]

Mr. Newsom said that California was working with the federal government on its vaccination plans, but that experts were helping to figure out expected logistical challenges.

They include where to store vaccines that must be kept cold, how to notify people about when to get their second shots and how to guarantee that rural communities have proper access to vaccines.

Mr. Newsom cautioned against being “overly exuberant” about the prospect of widespread vaccination; he said that won’t happen until next year. “This vaccine will move at the speed of trust,” he said.

California’s new case rates have stayed relatively low, even as the state has expanded testing and gradually lifted restrictions on businesses. Still, he implored residents not to let their guard down as the holidays approach.

(This article is part of the California Today newsletter. Sign up to get it by email.)

Here’s what else to know today

Jill Cowan grew up in Orange County, graduated from U.C. Berkeley and has reported all over the state, including the Bay Area, Bakersfield and Los Angeles — but she always wants to see more. Follow along here or on Twitter.