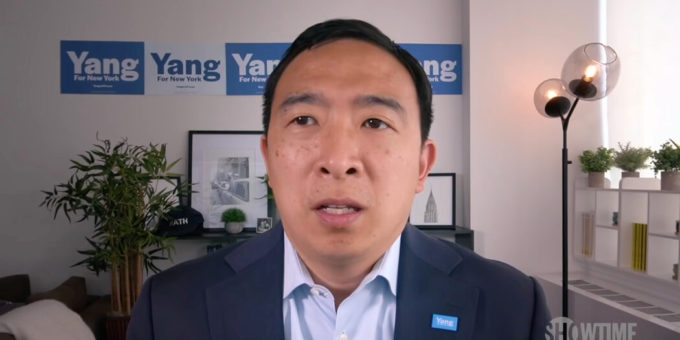 His business record was questionable. His political record was sparse. But as Alex Pareene put it in The New Republic, he became “a television character that people have not only heard of but actually like.” On the debate stage, on outlets like the Joe Rogan podcast and as a CNN commentator, he found a following for his advocacy of a universal basic income and his one-liners, like “The opposite of Donald Trump is an Asian man who likes math.”

Mr. Yang has plenty of differences from the reality-TV star he ran to replace. But as a mayoral candidate, he is also testing the theory that in today’s politics, there is no such thing as bad publicity. Mr. Trump’s 2016 campaign was a series of detonations that, as a seminal tweet put it, people were confident “ol Donny Trump” would never wriggle his way out of — all of which cemented his place as the lead of the antihero drama.

If Mr. Yang’s New York run is more cringe sitcom in genre, we can’t rule out that pattern’s repeating. More than once, people have compared him with Michael Scott of “The Office,” the clueless enthusiast and tourist who praised his favorite authentic New York pizza slice, from Sbarro.

But here’s the thing: Michael Scott somehow managed to get and keep that managerial job at Dunder Mifflin. And people happily watched his character for years. Would you want him to be mayor of Scranton, much less the largest city in America? Maybe not. But beyond the vicarious laughs over his embarrassments, viewers responded to his indomitable, unshameable optimism. (Mr. Yang’s own campaign even embraced the comparison last week, tweeting a video of him sinking a basket, with the quote, “‘You miss 100% of the shots you don’t take. – Wayne Gretzky’ – Michael Scott.”)

And so the character arc of Andrew Yang continues, moment after meme, through one surefire-campaign-killer after another. (The Ziwe offer last week delighted anti-Yang Twitter, which imagined her ending him.) Maybe those incidents will, cumulatively, leave him coming up short.

But for now, they are generating him outsized media attention (of which this piece is an example) and putting his name at the top of the credits. It is the sort of feeding frenzy in which it is not always clear who is being eaten and who is doing the eating. One person’s bait, these days, is another person’s meal.