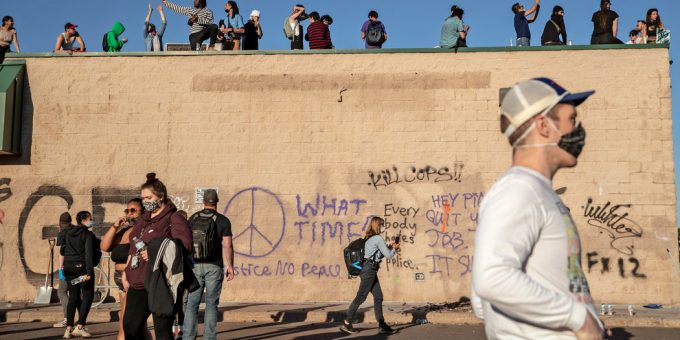 Want to get The Morning by email? Here’s the sign-up.

Minnesota’s Twin Cities metro area has one of the country’s highest standards of living by many measures: high incomes, long life expectancy, a large number of corporate headquarters and a rich cultural scene.

But these headline statistics hide a problem: The Twin Cities also have some of the largest racial inequities in the U.S.

Samuel L. Myers Jr., an economist at the University of Minnesota, has named this combination “the Minnesota paradox.” Because the area is predominantly white, the racial gaps can get lost in the overall numbers.

Now, these inequities have captured the nation’s attention, after the killing of George Floyd by the Minneapolis police sparked nationwide protests. Several other recent high-profile police killings have also taken place in the region.

Why does the Twin Cities have especially deep racial problems? The region is in many ways a microcosm of the country, albeit a more extreme one. Decades of government policy and private-sector decisions have given benefits to white families that black families haven’t received. (A new article by John Eligon and Julie Bosman goes into more detail.)

When the region built an interstate highway in the 1950s, it spared white neighborhoods but tore up a black neighborhood, in the eastern part of the Rondo area in St. Paul, that was “rich with institutions, like churches, social centers, and clubs,” as Quartz reported.

Working-class white families were able to buy their first homes in the mid-20th century — and start building wealth — with help from federal loan programs that excluded black families, as Richard Rothstein explains in his book “The Color of Law.” More recently, banks have been more likely to turn down black loan applicants, Myers found, even after controlling for income and credit risk.

Consider this recent stat: About 76 percent of Twin Cities households headed by a white person own their home, compared with 24 percent of black households.

“We so want to believe we are not racist,” Doug Hartmann, chairman of the University of Minnesota sociology department, has told The Star Tribune, “we don’t even see the way that race still matters.”

For more: “Minnesota, the longtime Democratic presidential stronghold that Donald Trump nearly won in 2016, has suddenly become ground zero in a campaign that already promised to inflame racial and cultural divides,” Politico writes.

For the sixth day in a row, protesters poured into the streets, sometimes peacefully and sometimes not.

Fires burned outside the White House, and the building turned off almost all of its external lights. In New York, chaos erupted in Union Square, with fires in trash cans. In Birmingham, Ala., protesters began tearing down a Confederate monument. Here are the latest updates.

Police in many cities have responded aggressively, with batons, tear gas and rubber bullets. In some instances,the aggression seems to have been unprovoked. In Minneapolis, as officers apparently fired paint canisters at people on their porches, one officer said, “Light them up.”

Health officials are worried that the mass protests may seed new coronavirus outbreaks. Mayor Keisha Lance Bottoms of Atlanta said she was concerned that demonstrations could increase infections in communities of color, which have already been hit disproportionately.

Measuring risk: The protests are in the open air, which could reduce the risk of transmission, and many of the demonstrators have been wearing masks. But shouting can create more respiratory droplets, and police tactics — including tear gas and pepper spray, which cause people to tear up and cough — may also accelerate transmission.

The Tara Reade-Joe Biden story continues to be vexing. On the one hand, false accusations of sexual assault are extremely rare. On the other hand, Reade has a history of making statements that aren’t always true, such as claiming to have a bachelor’s degree from Antioch University Seattle.

To get a better sense of the story — and Reade’s allegation against Biden — The Times has interviewed nearly 100 of her friends, relatives, co-workers and neighbors, as well as reviewed court records. That reporting shows how Reade’s pluck and smarts helped her overcome an abusive childhood to find opportunities in acting, politics and law. It also shows that she has a tendency to embellish and has left several former friends feeling disappointed or duped.

Jim Rutenberg, Stephanie Saul and Lisa Lerer offer much more detail in an article that runs more than 5,000 words.

Here’s what else is happening

BACK STORY: Lessons from the AIDS crisis

When Julia Marcus saw people being shamed on social media several weeks ago for going to a public park during the lockdown, she had a flashback. It reminded her of the shaming of gay men for having sex during the AIDS crisis. And she thought it was both cruel and unproductive.

So Marcus, an epidemiologist at Harvard Medical School, began speaking out in tweets, television interviews and two articles in The Atlantic.

I think she’s emerged as one of the most thought-provoking writers on the coronavirus, and I wanted to encourage people to think about her argument.

Marcus is calling for a “harm reduction” approach. People won’t remain shuttered in their houses for months, just as they won’t stop having sex. The key instead, she says, is helping people understand how to reduce their risk of contracting the virus — say, by meeting up with a few (masked) friends in a public park. If shaming keeps them from doing so, they may instead meet indoors, which is much more dangerous.

“The abstinence-only and harm reduction approaches share the same goal of reducing illness and death,” she told me, “but from what we know about H.I.V., substance use and other areas of health, harm reduction is far more likely to work.”

For more, check out an infographic on risk that Marcus and Ellie Murray, another epidemiologist, created; and Marcus’s more recent Atlantic article, which promotes the Canadian idea of “double bubbles,” in which two families agree to merge their quarantines.

Lady Gaga is back

It’s been seven years since Lady Gaga’s last dance-pop album, and her newly released “Chromatica” is a highly anticipated return to form. The Times’s pop music editor, Caryn Ganz, writes that the album “has some sparkling vocal moments” and ready-for-the-dance floor hits.

“But it feels overwhelmingly safe — a low bar to clear when you’ve released two of the greatest pop albums of the century,” she continues.

Dreaming of a park bench and a book

Much like the jingle of an ice cream truck, a lazy day spent reading on a park bench or sprawled on a park lawn is a hallmark of summer in New York City. To capture some of that spirit, the Book Review put together an archival photo series of people reading during summers past, filled with images of more normal times.

Bala promotions: Bhumi Pednekar’s latest look is all over the place
2019-11-01