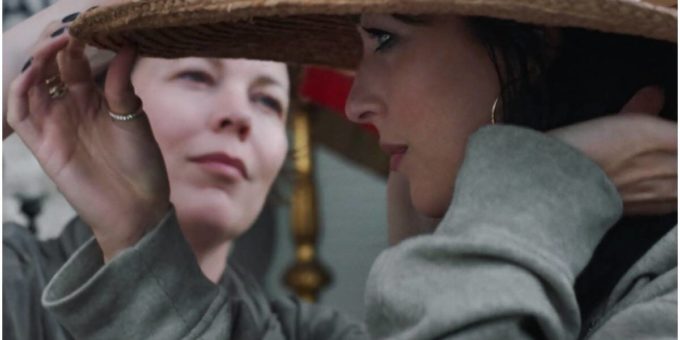 “Don’t think badly of me,” Dakota Johnson’s mysterious young mother tells the mythical-sounding Leda in the new Netflix film The Lost Daughter. Played by Olivia Colman, Leda waves her concerns away. “Oh, I don’t think badly of anyone,” she says in the Oscar-winner’s typical singsong voice. And this is driving sentiment behind debutante director Maggie Gyllenhaal’s movie.

Based on the elegiac novel by Elena Ferrante, The Lost Daughter is a film about not-so-nice people, but you wouldn’t catch writer-director Gyllenhaal judging them. If anything, the movie is searingly empathetic towards its characters, the most prominent of whom is a middle-aged divorcee who makes it quite clear, on several occasions, that she wasn’t quite cut out for motherhood.

On a ‘working holiday’ at a beachside Greek town, Leda’s bliss is rudely interrupted by a rowdy family from New York. They reek of entitlement as they demand that Leda make room for them on the beach by moving her things to one side. More out of her inherent defensiveness than anything else, Leda refuses, but ends up painting a target on her back for the rest of the trip. The rude family isn’t accustomed to hearing no for an answer, and it shows. Have you ever been to a quiet mountain cafe, admiring the sunset in peace, only to hear someone loudly ask if they have butter chicken on the menu?

Leda, a scholar of Italian literature who has a ringtone that sounds like a Miles Davis song, can’t help but thumb her nose at the beer-guzzling, tracksuit-wearing lunkheads who’ve desecrated her personal beach. She gives them a look of such disgust that you’d think she’s just witnessed the storming of Normandy.

But she is drawn to the quietest of them—Nina, the young mother played by Johnson, who appears to be just as distressed about the idea of having to take care of a child as Leda was when she was her age. They exchange looks, and before long, develop a quiet connection.

As she observes Nina, who appears to be teetering on the edge of a mental breakdown as she struggles to care for her daughter Elena, Leda is jolted by memories of her own past as a young mother to two daughters. In these flashbacks, she is played by Jessie Buckley, one of the most exciting actresses of her generation, and perhaps the only one who could have gone toe-to-toe with Colman in a narrative that requires each of them to be operating at the same level.

On one of her trips, the young Leda is seduced by a swan-like academic played by Peter Sarsgaard, who, in a  moment of symbolism that comes off as a tad too on-the-nose, recites Yeats to her. In Italian. No wonder she didn’t judge Nina when she caught her in a compromised position.

For a Peril in Paradise movie, Gyllenhaal isn’t so much concerned about unclothing their bodies as she is about penetrating their minds. Her mostly handheld camera lingers on faces, and taps out of scenes on its own terms. It’s confident filmmaking; Gyllenhaal is a first-time director with a voice—someone who can conjure up suspense from an unbroken shot of an orange being peeled.

The Lost Daughter is a complex story about motherhood that makes the bold decision to not offset the potentially alienating drama by introducing the perspective of Leda’s daughters. Nor does it litigate her for abdication of her motherly duties.

But there’s a sense that Leda has put herself on trial. She tears up easily, and latches on to Nina without much resistance, despite knowing that she’s probably inviting trouble. It is quite obvious that Leda has erected barriers around herself, but it’s never quite clear if this is a mechanism to protect herself from others, or to protect others from herself.

But it certainly dismantles several age-old notions about motherhood. The Lost Daughter is a movie about unfeeling women, made with a tremendously tender hand. Leda and Nina haven’t simply resigned to the fact that they’re emotionally detached, they’re caught in a crippling cycle of wanting to conform, but also wanting to break free. In Leda, Nina can see her future, and it terrifies her. And in Nina, Leda can see her past. Unlike the orange peel, this chain will likely remain unbroken.