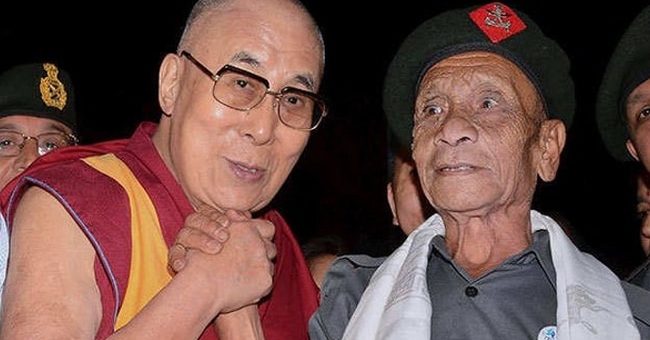 The last surviving member of a small troop of soldiers who escorted the Dalai Lama as he fled from Tibet in 1959 has died aged 85, his former regiment said today.

The Tibetan spiritual leader arrived in India as a young monk after a 13-day trek through the Himalayas disguised as a soldier to evade detection by Chinese troops.

Naren Chandra Das, who died Monday at his residence in Assam, was 22 at the time and had just completed his training with the Assam Rifles, the Indian Army’s oldest paramilitary force.

Along with six other soldiers, he escorted the monk to Lumla in Arunachal Pradesh on March 31, 1959.

Das in an interview with local media last year described how the soldiers had walked through the mountainous region while the Dalai Lama was on a horse.

The retired soldier recalled how his group was not allowed to talk to the young monk as they escorted him to safety.

The 86-year-old Dalai Lama, who denies seeking Tibetan independence, has lived in exile in India ever since.

The two had an emotional reunion in 2017 when they met for the first time in almost 60 years.

“Looking at your face, I now realise I must be very old too,” the Tibetan spiritual leader told Das.

A year later, Das was invited to Dharamsala, where the Dalai Lama had set up a Tibetan government-in-exile with permission from Delhi.

“I went with my family and he hugged me there. He had also given me a memento. I shall never forget my meeting,” Das had said last year.

Five arrested over rape in Uttara

Pakistan’s economic position will be ‘far better’ by August: Fawad