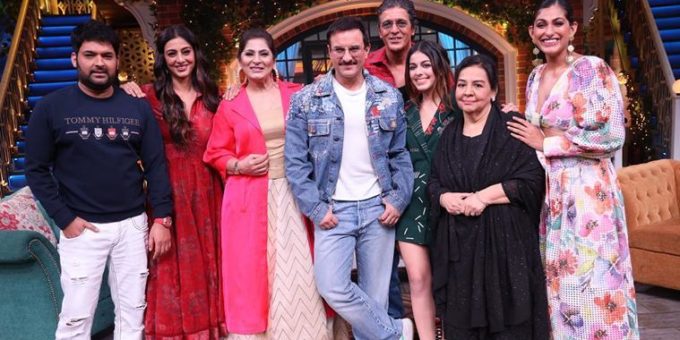 This Saturday, the entire cast of Jawaani Jaaneman will grace The Kapil Sharma Show. The episode will see Saif Ali Khan, Alaya F, Tabu, Chunky Panday, Kubbra Sait and Farida Jalal getting candid with Kapil and his team. The actors will also be seen performing on the peppy numbers from the film. While Krushna Abhishek’s Sapna will tease Saif Ali Khan about being forever young, Bharti Singh’s Bua will announce that she has had a past with Panday

Knowing that he comes from a royal family, Kapil Sharma will quiz Saif Ali Khan on whether he has done anything like a common man. To his surprise, Khan will reply that given Mumbai’s traffic he often travels in auto rickshaws. He will also share that he recently took his son Taimur on a rickshaw ride, and he had a lot of fun. Khan will also share that like any other common man, he has done private jobs to earn his living and even stolen money from his father’s purse when he was a kid.

Saif Ali Khan will share that he has taken Taimur on a rickshaw ride.

When Govinda got angry for Saif and Ajay’s prank

Saif Ali Khan will narrate an incident when he and Ajay Devgn pulled a prank on Govinda. Khan will share that they called Govinda pretending to be someone else and scared him over something. The actor came running to the shoot worried. While Ajay, being an expert prankster, pretended to be speaking on the phone, Saif got caught by Govinda. Khan will share that Govinda could sense something’s fishy looking at his expression, and he scolded him for his prank.

Saif Ali Khan will talk about the time when he, along with Ajay Devgn, pulled a prank on Govinda.

Taking from Saif’s story, Chunky Panday will also share a fun memory when Akshay Kumar played a prank on him. He will narrate that he was having dinner with Akshay, Sajid Nadiawala and some other friends in a fancy restaurant. When the bill came, he slyly went to the washroom to avoid pitching in for the bill. When he came back, much to his surprise everyone had left without clearing the dues. As he sweated over dishing out the big bill, Nadiawala came back to rescue him and offered to pay instead.

A perfect selfie moment on the sets of The Kapil Sharma Show.

Saif Ali Khan will talk about his debut Aashik Aawara that also starred Archana Puran Singh. Singh will share that during the same film, she secretly tied the knot with husband Parmeet Sethi. Saif will join in saying that secret weddings were in trend during that time. Singh will further add that once she got late for the shoot after her marriage, and got a scolding from the director.

In a fun moment, Kapil Sharma will ask Saif Ali Khan about the pet name he has given to his wife Kareena Kapoor. The actor will stop the comedian and in turn pull him up for flirting with her when she was on the show for promoting Good Newwz. And embarrassed Kapil will go speechless for the first time, while the team will have a hearty laugh over it.

Israeli Arabs fear for their future under Trump peace plan

Pakistan to face India in U19 Cricket World Cup semi-final

Tristan Thompson to Khloe Kardashian: Just Give Me One More Chance!
2019-03-24