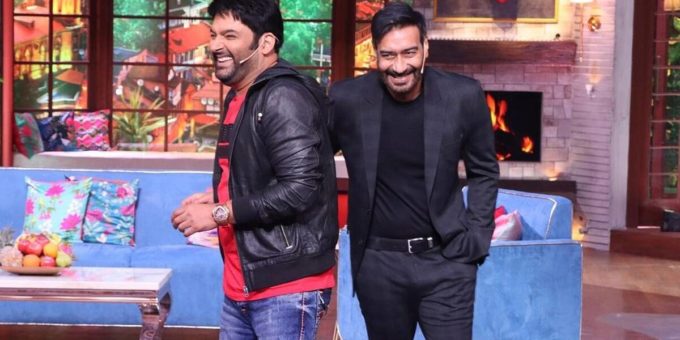 The Kapil Sharma Show is returning to Sony TV this week, and Ajay Devgn is one of the upcoming guests on the show. The actor will be seen promoting his latest film Bhuj: The Pride of India on the show along with co-star Nora Fatehi. Sony TV on Tuesday released its promo on social media, which gives a sneak peek into the fun that the Bhuj cast, including Ammy Virk, had with Kapil Sharma, Kiku Sharda and others.

The promo features a hilarious banter between Ajay and Kapil where the latter, talking about Devgn’s character in Bhuj where he builds a runway with the help of 300 women, asks him if Union Minister for Road Transport and Highways Nitin Gadkari asked him to build “highways”. To which Ajay quips, “I didn’t make any call but why don’t you tweet about it? After all, you tweet top shot people,” referring to his famous 2016 tweet to Prime Minister Narendra Modi.

Back in 2016, Kapil Sharma in a tweet had alleged that he had to pay Rs 5 lakhs to Mumbai civic body for making his office. “I am paying 15 cr income tax from last 5 year n still i have to pay 5 lacs bribe to BMC office for making my office @narendramodi,” he wrote, tagging PM Modi in the next tweet, “Yeh hain aapke achhe din @narendramodi.”

A red-faced Kapil, listening to Ajay’s remark, replied, “You also try tweeting once. You will know why I have left tweeting,” as the audience erupted into laughter. Later in the clip, Kiku Sharda jokes about Nora Fatehi’s dance step in the track “Garmi” from Street Dancer 2020.

Will Participate In PM Modi’s Jammu And Kashmir Meeting On Thursday: Gupkar Alliance
2021-06-22

Vastu Tips: How to identify negative energies at your home and remove them
2020-09-13