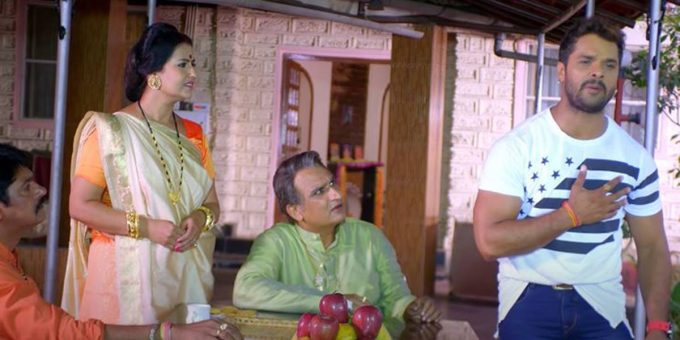 
A still from the 2018 movie Sangharsh, in which Khesari Lal Yadav plays a Yadav character. (Photo: YouTube/screengrab)

As the hurly burly for the Bihar Assembly polls gets underway, much is being written, said, and sung about the myriad caste loyalties in the state. Elections in Bihar, both Assembly and Lok Sabha, see a proliferation of Bhojpuri campaign songs, in praise of particular leaders, carrying a party’s message, or taking jibes at rivals.

Two of the most popular Bhojpuri artistes, Ravi Kishan and Manoj Tiwari, are BJP MPs. And yet, little content in Bhojpuri cinema is based on Bihar’s politics, in part because of its strange relationship with the strongest current driving this politics –– caste.

Elections are only one –– and not the biggest –– indicator of the central importance caste continues to hold in Bihar, stamping, claiming every sphere of one’s life.

But caste as a subject continues to be absent from modern Bhojpuri cinema.

In the past two decades, Bhojpuri cinema has seen unprecedented popularity and prolificacy. The industry is spreading its wings in many ways –– to take one example, a popular movie franchise began as Nirahua Rikshawala (Nirahua the rikshaw driver) in 2008 and its latest release, in 2019, was Nirahua Chalal London (Nirahua goes to London).

But in all this, few movies have had caste divisions as their main theme. Some of the most prominent events of the past decades –– the bloody caste wars of the 1990s, the rise of Lalu Prasad Yadav and his politics –– have not made it to the screen.

So does Bhojpuri cinema exist in a casteless bubble? Not quite. Caste does shape Bhojpuri cinema, like it does everything else in Bihar. And the industry’s interactions with caste are an interesting window into how the state itself, beset by many changes and yet stagnating, today negotiates caste.

Talking to those who watch and study Bhojpuri cinema, one gets broadly two answers on why it shies away from depicting caste divisions – the audience doesn’t want ‘serious’ movies, the makers don’t want to provide ‘thought-provoking’ content.

Jainendra Dost, a filmmaker who runs the Bhikhari Thakur Repertory Training & Research Centre in Chhapra, says: “Bhojpuri movies largely follow the poor-boy-meets-rich-girl Bollywood formula. But the differences are sought to be made about class rather than caste. Also, where the hero does happen to have a lower-caste surname, he is still a traditional feudal ‘dabang’ –village stud, great fighter, etc.”

Pramod Kumar, a Bhojpuri lyricist from Buxar, agrees. “Once a kind of movie works, it is reproduced for the next two years. There is no space for the kind of nuance needed to tackle a subject like caste.”

And why is that so?

Pushya Mitra, a Bhojpuri writer from Patna, says: “Consider the audience that watches these movies. A large section of them are labourers, or people doing menial jobs in cities far from home. At the end of a long work day, they don’t want thought-provoking stuff. They want things that can entertain, give a laugh, titillate. Caste etc. are subjects for a more elite audience, which wants food for thought from its cinema. Not for those seeking a quick escape.”

Dr Sanjay Paswan, former MP and current BJP MLC in Bihar, says caste is a “subject for Hollywood, not Jhollywood”. “Subjects like caste offer excitement, not entertainment, which people are seeking. The makers are after all offering a product. In commerce, there can be no caste. They offer what is acceptable to all.”

However, there are others who say the assumption that ‘this is what the audience wants’ is in itself casteist.

Banarasi Alam of Gaya is a Dalit activist who once performed in ‘launda naach’ troupes. Today, he does puppet shows in villages on themes of social importance. “If all the audience wanted was entertainment divorced from reality, our performances would have no takers. People still flock to watch what we do, to retellings of old folk tales about lower caste heroes. It is the makers who assume the audience is poor and illiterate and wants cheap thrills.”

Avesh Tiwari, a journalist who hails from Banaras, says the same. “The ‘we provide what the audience wants’ argument is basically manufacturing demand. You have decided a certain kind of audience doesn’t deserve better effort.”

But again, there’s no simple binary of upper caste filmmakers looking down on their largely lower-caste audience. “A large section of the audience watching Bhojpuri cinema is from the lower or middle castes. And some of the biggest stars are upper castes. But people from the middle castes are involved in production and distribution. A lot of movies are made outside Bihar-Uttar Pradesh. And now, we are holding auditions for actors, where we only look at their talent,” says Devendra Kumar, who handles PR for Bhojpuri movies.

Deepu Nishad, a rickshaw driver in Arrah, says two things need to be understood about what guides creation and consumption of cinema here. “No filmmaker can afford to get too honest about caste in Bihar. The political assertion of the backward castes may not have brought them much development, but it has ensured this –– it is no longer safe to offend any caste in Bihar. Secondly, why assume a Yadav or a nai (barber caste) objects to his ‘feudal hero’ depiction on screen? That’s what they aspire to, they love it!”

There is also the nature of the industry itself.

Tiwari says: “There are several reasons why Bhojpuri cinema lacks people to take up difficult subjects like caste. First, it is still a low-cost industry. The makers can’t really afford to pay great writers, actors, directors. Second, since most Bhojpuri speakers are comfortable in Hindi, our better talent moves to Bollywood. Third, Bihar or UP governments never gave Bhojpuri cinema the kind of state support Bangla or Marathi movies get.”

Nirala Bidesiya, a Bhojpuri writer in Bihar, adds another factor: “Except for Ravi Kishan, all the most popular stars in Bhojpuri started off as singers –– Manoj Tiwari, Pawan Singh, Dinesh Lal Yadav, Khesari Lal Yadav. They already had a very established identity before they entered cinema. The audience won’t accept a person it knows as a Tiwari (a Brahmin) playing a Ram (a Dalit surname). So you’ll see Pawan Singh playing a Rajput often, Dinesh and Khesari play Yadav characters, and so on.”

There is also a caste angle in how the industry was shaped. The blue collar migration to better-paying jobs, and the political and social assertion of the backward castes in the past decades, created a new class of audience. But accompanying this was the white collar migration of the more educated, resource-rich upper castes. Nirala says once out of Bihar, this category tried hard to ‘de-Biharise’ itself, leading to a neglect of Bihar’s literature and culture. “The frivolity of the Bhojpuri film industry is not isolated. It is hard to name a great work of literature on caste issues penned in Bhojpuri, or any of Bihar’s many dialects, in the last 20 years.”

Dhananjay Kumar, a member of India’s Screenwriters Association, says: “For cinema to go beyond commercial and turn reformist, or at least socially conscious, there needs to be a general feeling of pride in the language. That is missing here, both in the immigrants and in the left-behinds.”

Dost says caste dealt art in Bihar a double whammy. “The lower castes in Bihar are equipped with a long tradition of performing arts, but that was not considered mainstream by the upper castes who once decided everything. And those who were equipped with knowledge of ‘mainstream’ literature and arts are today not very interested in Bhojpuri – they have English, or at second best, Hindi.”

There are also those who question: why must cinema talk about caste? “Bhojpuri cinema reflects a changing society. Its Bollywoodisation is symbolic of an aspirational audience. These movies are watched by people in Fiji, Trinidad. They can’t just show Purvanchali society,” says Abhishek Shrivastav, a Banaras resident. “And of course, there is also the fact that a raw portrayal of caste can lead to cinema halls being burnt down,” he adds, as an afterthought.

And so, Bhojpuri cinema exists in its strange world, shaped by caste, yet unable to look it in the eye, much like a section of Bihar itself.

From Nora Fatehi to Genelia Deshmukh: Who wore what at Abu Jani-Sandeep Khosla’s red carpet event
2021-02-08

B.C. pleased with Oklahoma ruling in opioids case as it continues lawsuit
2019-08-27