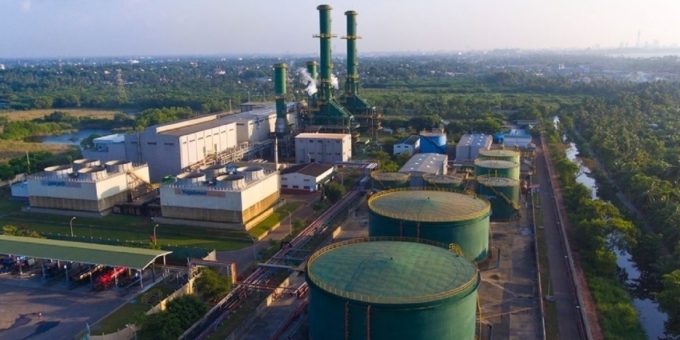 COLOMBO (News 1st); Trade Unions warned that after the 3rd of November the entire country will be in darkness, if the controversial LNG deal with New Fortress Energy Inc, is not withdrawn.

He said on the 29th of October, Trade Unions in the Ceylon Electricity Board will step away from their duties, while demanding the government to immediately withdraw the agreement.

In September 2020, New Fortress Energy Inc. announced that they executed a definitive agreement for New Fortress’ investment in West Coast Power Limited (“WCP”), the owner of the 310 MW Yugadanavi Power Plant based in Colombo, along with the rights to develop a new LNG Terminal off the coast of Colombo, the capital city.

As part of the transaction, New Fortress will have gas supply rights to the Kerawalapitya Power Complex, where 310 MW of power is operational today and an additional 700 MW scheduled to be built, of which 350 MW is scheduled to be operational by 2023.

New Fortress will acquire a 40% ownership stake in WCP and plans to build an offshore liquified natural gas (LNG) receiving, storage and regasification terminal located off the coast of Colombo.

New Fortress will initially provide the equivalent of an estimated 1.2 million gallons of LNG (~35,000 MMBtu) per day to the GOSL, with the expectation of significant growth as new power plants become operational.

However, multiple factions including His Eminence Malcolm Cadinal Ranjith, Venerable Elle Gunawansa Thero, The JVP and the Samabi Jana Balavegaya have gone to courts challenging the decision taken by the Cabinet of Ministers to proceed with the controversial transaction.

In addition, 11 Political Parties affiliated with the government say if they are not given an opportunity to discuss matters surrounding the controversial LNG deal with the executive, they will be compelled to take their case to the people.

11 government parties made a written request to the President to provide an opportunity to discuss the matter, which was later turned down.

When these parties met again on Saturday (23), Minister Vasudeva Nanayakkara told reporters that the 11 parties within the government maintain their position against the proposed agreement surrounding the Kerawalapitiya Power Plant.

Despite not being awarded an opportunity to meet the President to discuss the matter, Nanayakkara said “It isn’t over, yet”.