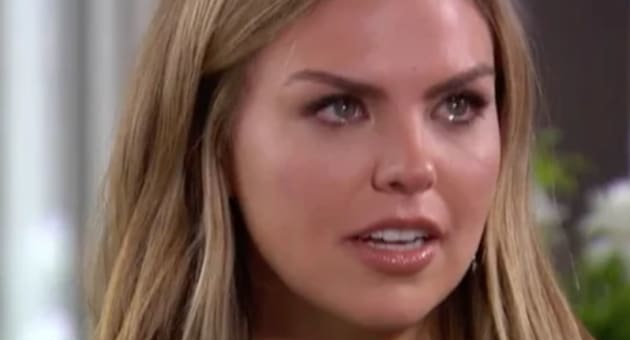 Hannah Brown tried to be patient.


She tried to remain calm and cool and collected, even in the face of all the pettiness and bitterness on display each week between the man fighting for her ring finger.


But she finally lost it on Monday night.


The latest installment of this ABC hit took us back to Scotland, where Hannah refused to give Luke Parker a rose after their one-on-one date,


Much to the total chagrin of this front-running villain.


“I’m shocked, confused,” he said in an on-camera interview, adding in extreme detail:


“It never crossed my mind that I’m going to go home. Sorry. It’s a tough pill to swallow right now. I didn’t ever think this was going to happen to me, but here I am.


“From the moment I met her, I’ve felt things that I’ve never felt in my whole entire life. Our relationship has been strong and our connection has been strong, and really, I care about her so much.


“I don’t want to go home. Hannah was right. I have tried to be, quite frankly, perfect, and now it’s like my eyes have been opened. I need to fight for her because I don’t want to lose her. Nothing’s gonna stop me.


“Nothing’s going to clutter or cloud my mind except for pursuing Hannah.”


When Luke eventually got back in front of Hannah, he explained that the serious nature of their relationship issues “hasn’t hit me until tonight,” saying to The Bachelorette:


Is that sweet? Or are those the words of a stalker?


Hannah leaned more toward the former, choosing to keep Luke around until at least the rose ceremony.


“I’m pretty aware that every single guy doesn’t like Luke P., but what I did tonight by not giving him a rose but not sending him home was the right decision for me,” Hannah reasoned to the cameras.


“And the guys have to trust me and to know that I’m doing the best for my heart, not just for that relationship, but for all my relationships.


“Finally, he was at least meeting me where I needed him to. If he continues with small moments where he really did show himself and show true emotion and struggle, then that man will receive a rose every time.


“But if by tomorrow he goes right back to the weird, robotic Luke that I have no connection with, then he won’t get a rose.”


The other suitors all had serious issues with Hannah not kicking Luke (hard!) to the curb.


Garrett asked the former beauty queen about it, specifically about whether Luke stopped trashing his fellow contestants as he vowed he would, and she replied as follows:


“I’m aware that there are feelings about him from everyone. And I addressed that. And so he did say Mike’s name, but I do feel like I provoked it a lot in that moment, and I also asked about another situation, and he did say Devin and Dylan.


“But I think it was truly having a conversation about something and I was the one that asked.”


Despite this reply, Garrett went back to the suitors and everyone continued to slam Luke… which prompted Hannah to emerge and deliver the ultimate Bachelorette rant to each and every guy remaining.


We’re just gonna publish the full transcript of it here, for full and awesome effect:


I’m so frustrated about there always being fights in the house and it’s pissing me off.


I don’t know what’s going on but it’s getting it’s getting really frustrating that there [are] always being fights in the house and then tell me exactly what was happening.


I will answer any question about what he said to me and then you can tell me if that’s true or not and then we can all talk about it because it’s affecting everything at this point.


I’m frustrated as f-ck. The thing I want to say to you all is stay in your freakin’ lane because I’m tired of hearing screaming.


That sound you hear right now if every other Bachelorette in history standing up and applauding Hannah.


After hearing Garrett and Luke continue to argue, Brown downed her champagne and marched right back out to confront everyone.


“Please stop pointing fingers at other people and allow me to do that and focus on yourself and what I need from you.


At the rose ceremony, Luke P. received a rose… because of course he did, right?


However, Hannah did not offer a toast to her remaining suitors, telling them:


Visit our section of The Bachelorette spoilers to see what’s on tap and check out this intense trailer to see why Luke truly sucks.

Bharat closes in on the Rs. 200 crore club

Markets fall as investors are more convinced of big rate increases to come.
2022-10-07