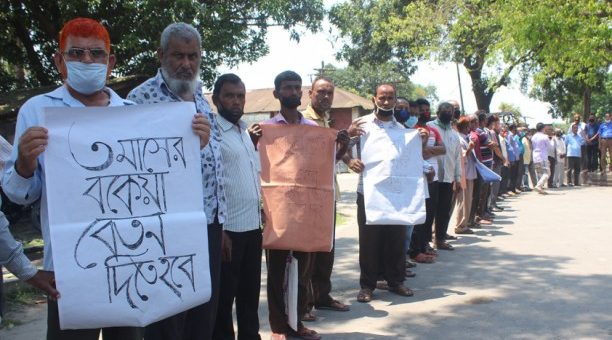 Workers and employees of Thakuraon Sugar Mills Ltd. today staged a demonstration on the mill premises demanding their due salaries.

Under the banner of Thakurgaon Sugar Mills Workers and Employees’ Union, over a hundred staffers of the mill took part in the agitation.

The programme followed a rally at the same venue where the leaders of the union said a total of 725 workers and employees of the sugar mills are in misery during the month of Ramadan as they did not get the salary for two months from March.

They urged the authorities to pay their due salaries within a week, and announced a tougher programme to meet their demands otherwise.

“We are not getting any salary for two months now. Whenever we go to the higher officials, they say they cannot pay the salary as there is no sale of sugar,” said Md Kajol Rahman, an employee of the mill.

“We pay salary to our staff after selling sugar. We are corresponding with the higher authorities of Sugar and Food Industries Corporation regarding the issue. Hopefully, we will be able to pay the salaries before Eid-ul-Fitr,” said Md Sakhawat Hossain, managing director of the sugar mill.

Mill sources said at least 3,358 tonnes of sugar have been produced from 54,000 tonnes of raw sugarcane in the last season.