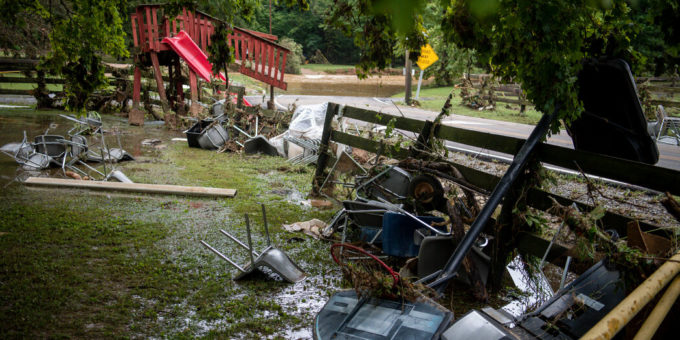 At least 10 people were killed and about 40 others were missing on Saturday after catastrophic flash floods swept through Central Tennessee, the authorities said.

Rob Edwards, the chief deputy of the Humphreys County Sheriff’s Office, confirmed the numbers of missing and dead and said the authorities were doing house-to-house checks in the hardest-hit areas in Humphreys, a rural county of about 18,500, roughly 72 miles west of Nashville.

There were “power outages all over the area,” Deputy Edwards said in an email. “Complicating issues is the loss of all cellphone coverage from the major carriers,” he added.

Portable communication units were being brought in to help restore service, he said.

The devastation came after an estimated eight to 10 inches of rain inundated Dickson, Hickman, Houston and Humphreys counties, the National Weather Service said on Saturday morning.

By Saturday night, officials were reporting that some areas had gotten more than a foot of rain.

In McEwen, a small community in Humphreys County, just over 17 inches of rain had fallen, setting a new 24-hour rainfall record for the region, the weather service said.

The Tennessee Emergency Management Agency said that the state Emergency Operations Center had been activated in Nashville to support water rescues and other urgent requests for help from local officials.

“Our first priority is to assist with getting responders access to the area and conduct rescue operations,” Maj. Gen. Jeff Holmes, the adjutant general of the Tennessee National Guard, wrote on Twitter. “We’ll continue to increase the number of forces as the situation dictates and we’ll be positioning additional specialty units to respond as needed.”

At least 4,200 people across the state had lost power, according to the Tennessee Emergency Management Agency. It said that flooding in the affected counties was “dangerous and evolving,” and it urged residents to stay off the roads, charge electronic devices and monitor the news.

“Do not attempt to cross flooded roads or walkways,” the agency said. “Turn around, don’t drown.”

The Meriwether Lewis Electric Cooperative said it could take several days to restore power and broadband service to the area.

The utility said that its office in Humphreys County had flooded and could be “a total loss,” and that trucks and equipment had been damaged. Most employees were unable to reach the office because of the flooded roads, the cooperative said.

“The safety and well-being of our communities, employees and rescue efforts are top priorities right now,” Keith Carnahan, the president and chief executive of the cooperative, said in a statement. “These are devastating conditions to work in, but our employees and their heart for service are ramping up for the long days ahead as our hometowns begin to heal.”

Waverly Elementary School in Waverly, Tenn., the Humphreys County seat, was “completely flooded,” with water “4 feet deep in the entire school,” according to its Facebook page.

Two women had been stranded in the school gymnasium with some of their family members, one post read. A later post said they were “no longer at the school and on dry ground.”

“Please continue to pray for our community!” it read.

On Chiranjeevi’s birthday, 12 of his best songs that made him ‘King of Dance’