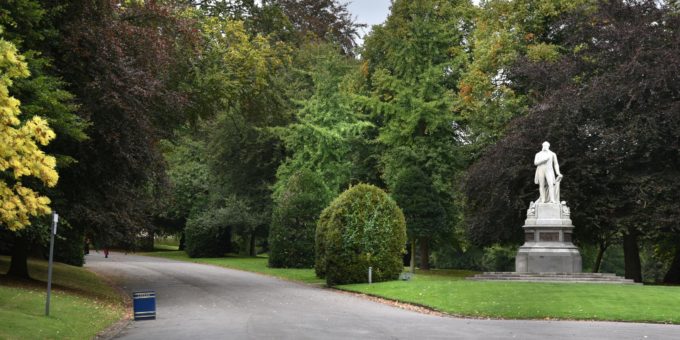 A teenager’s life was ruined after he suffered catastrophic injuries when he was run over by a motorist not paying attention, a Crown Court heard today.

The 18-year-old was walking home from Lister Park, Bradford, late in the evening when he was struck by a white Mercedes driven by Thaaqeeb Zafar.

Zafar, 22, of Brantwood Oval, Heaton, Bradford, was at the wheel of his mother’s Motability car when he hit the teenager who was crossing Farfield Street, prosecutor Austin Newman said.

The collision had left the victim with the mental capacity of a five-year-old and needing lifelong care, the court was told.

Zafar, who was 19 at the time and licenced and insured to drive the Mercedes, was originally charged with causing serious injury by dangerous driving, on April 21, 2019.

His guilty pleas to dangerous driving on Scotchman Road shortly before the collision and careless driving when he struck the teenager were then accepted by the Crown.

Mr Newman said the dangerous driving was a separate incident that involved Zafar driving at high speed in a residential area with a 20mph speed limit.

The court was told that he had slowed right down before hitting the teenager who was in dark-coloured clothing with reflective stripes on his jacket.

The victim could recall nothing of the incident except seeing a white car by the side of him afterwards.

Zafar fled the scene, returned and then drove off again before the police arrived, the court was told.

A crowd gathered at the scene to help the injured teenager who was struggling to stand. He was taken by ambulance to Bradford Royal Infirmary where a CT scan showed he had a bleed on the brain. He was transferred to Leeds General Infirmary for neurosurgery.

Mr Newman said he had suffered a life-threatening brain injury that needed multiple surgical procedures. He was left with a weakness all down the right side of his body, including his arm, left and ear. He was partially blind in his right eye.

A rehabilitation report prepared for the court hearing said he now had the mental capacity of a five-year-old and would require a lifetime of care.

The court heard that the victim’s uncle began a local investigation to trace the car that struck his nephew. Heaton councillor Mohammed Amran joined in to help and a white Mercedes with a damaged bonnet and windscreen was seen parked at Brantwood Oval.

Zafar and his mother attended the police station when she said it was her car and that he had been driving. He said he panicked and drove home and then made no comment to further questions.

Andrew Dallas said in mitigation that Zafar was 19 at the time. The eldest of five siblings, with no father in the household, had brought big responsibilities.

In the almost three years since the tragedy, he had spent time in Pakistan with relatives and turned his life around. He had gained a good job on his return to help to support his family.

Mr Dallas said the dangerous driving was “a brief period of excessive speed” and Zafar had “slowed down very substantially before the collision.”

Recorder Anthony Hawks conceded that he was probably sticking to the speed limit by the time he struck the teenager.

But because of his inattention to the road, he ran him over with “catastrophic consequences.”

“His life has been ruined and no doubt the lives of his family have been ruined,” Recorder Hawks said.

Zafar would have to live with that for the rest of his life, he stated.

Recorder Hawks said the dangerous driving before the collision was “not the worst case of its sort.”

“The accident was caused by inattention on your part, that is careless driving,” he continued.

Recorder Hawks made it clear that legally that offence can be met only with a fine and it was usually dealt with at the magistrates’ court.

Zafar was sentenced to four months’ imprisonment, suspended for 12 months, with 25 rehabilitation activity days, for dangerous driving. He was banned from driving for two years from November 1 last year when an interim ban was imposed, and until he takes an extended retest.

He was fined £500 for careless driving.

The court was told that separate civil proceedings were ongoing.

All Manitobans ‘highly likely’ to be exposed to COVID-19 in coming weeks, health official says