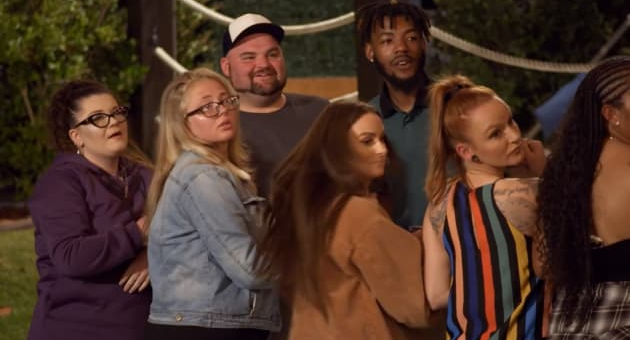 Most of the promised Teen Mom madness will come later in Teen Mom: Family Vacation, especially after Farrah arrives.


Even the premiere showed that the premise was a recipe for disaster — in a good way.


Things nearly came to blows after a round of “scream therapy,” and it was only the first night.


The premise, as presented on screen, is that Maci Bookout and Cheyenne Floyd arranged for the getaway, but not the guest list.


It looks like Maci and Cheyenne had no idea who else might show up — and that, at least, seems true.


“I want the moms to realize we are a lot more alike than we are different,” Maci said at the resort.


In a deeply sad reminder of how much their lives were changed, Maci added: “This will be the spring break that we never had.”


Cheyenne sounded a little less optimistic, observing “a lot of pettiness” among some of the cast.


Even so, she expressed a hope that this experience can bring some of them closer together.


The ladies arrived and had a meet and greet at a mixer.


This is when Maci and Cheyenne first learned that Farrah Abraham would be part of the group.


“We never got along with her,” Maci noted, “but we also said we should involve everyone.”


With Farrah’s ominous arrival still in the future, the opening conflicts had more to do with Jade, Briana, and Ashley.


Jade and Briana felt that Ashley had been disrespectful towards them on social media.


Jade wanted to keep her distance, Ashley wanted to just be Fake Nice (you know, like an adult), but that backfired with this crowd.


To throw gas on the fire, production include a life coach at the mixer.


Life coaches work well on reality television because they have no sense of shame, are immune to cringe, and encourage needless confrontation as “therapeutic.”


That is exactly what this one did, pushing the moms to work out all of their issues on the first night.


She didn’t stop there, but pushed the ladies to engage in something called “scream therapy.”


Literally, the moms were asked to scream something that they dislike about themselves or someone in the group.


This waking nightmare played out, and some of the answers were almost comically on brand.


Leah admitted that she has real issues with trusting people.


Amber, instead of taking responsibility for any of her abhorrent actions, yelled about the men she has dated.


Maci confessed her fear that she is “not enough.”


Briana of course raised a few eyebrows by complaining about “fakeness.”


Not afraid to turn her subtext into an explicit criticism, she made it clear that she was talking about Ashley.


Because Ashley had been aggressive online but fake nice at the resort (you know, like a grownup), Briana thought it was “f–ked up.”


“I feel like it could have been inflated given the fact we’re both on TV,” Ashley opined.


“I think if you and I had a chance to talk, it would have been different,” she added.


Ashley admitted: “I probably should have never said s–t, so for that I’m sorry.”


“I’m big enough to say I should have never said s–t,” Ashley affirmed.


Jade wasn’t willing to drop it, however.


“What I see here, how you’re talking to me, is a different person from what I’ve experienced online,” Jade observed.


“You try to bully me online, you try to put me down, say all these really toxic things,” she accused.


This heated confrontation was happening in close quarters.


Amber, herself familiar with how anger can turn to violence, expressed a concern that this could get physical.


Ashley promised that she had no plans to hit anyone, and continued to try to excuse her behavior.


Jade was not having it, yelling: “We all have our own f–king problems!”


This was when producers, sharing Amber’s worries, stepped in to create some space between the women.


Cheyenne watched this unfold at a distance, nursing her wine.


Maci marveled: “Literally night one? This is going to be a long trip!”


The life coach, on the other hand, was pleased and encouraged by the contentious mess that had played out.


Nothing was actually resolved, though, with Ashley now accusing Jade and Briana of being “fake as f–k!”


Security had to step in to keep Jade from reacting poorly.


Ashley made the situation by twerking her in an effort to taunt her.


Amber described: “I have a whole damn movie in front of me.”


This is just the beginning of the nonsense … and Farrah isn’t even there yet. What a world.