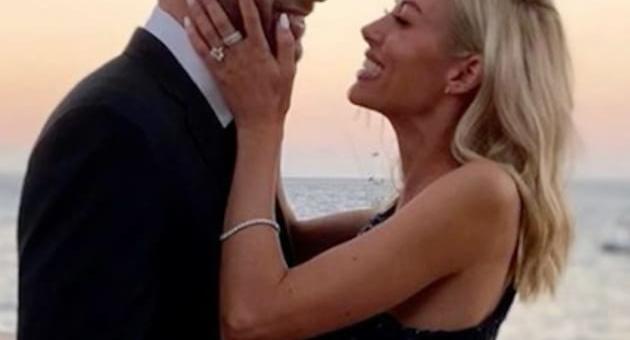 Tarek El Moussa and Heather Rae Young are both experts on the housing market.


But you know what they say about one’s home, right?


In actuality, it’s where the heart is.


Which now means we can officially say the following:


Tarek El Moussa and Heather Rae Young are at home with one another.


The Flipping 101 host and the Selling Sunset star exchanged vows on Saturday night near Santa Barbara while surrounded by loved ones that included Young’s famous colleagues and Tarek’s children from his first marriage.


“We’re best friends, we’re true soulmates, and our love is so rare and so special,” Young told People Magazine. “It’s the love I’ve always dreamed of my whole life


“I’m just excited to live this life with her. We’ve got the two babies, we have a family, and we have a very bright future.”


The famous couple also went public with their union on social media.


“We’re married!!!” Tarek announced on his Instagram Story, along with a video of him and Heather kissing while standing with his kids, Taylor, 11 and Brayden, 6, and the rest of their wedding party.


People, meanwhile, also has some of the more fashionable details from the affair.


Heather wore a fitted white corset dress with French lace, long sleeves, and a keyhole back custom-made by Israeli designer Galia Lahav for both the ceremony and reception, while Tarek went with a black velvet tux with a skull-and-crossbone-print lining


The stars got engaged in July 2020 while celebrating their one-year anniversary on Catalina Island off the coast of California, having met about a year earlier through a mutual friend.


On Friday, the brand new spouses celebrated at a rehearsal dinner. “Ready to say ‘I do,'” Tarek wrote on Instagram, alongside a picture of the pair.


“Which is crazy. If you had asked me four years ago I would’ve told you I was never getting married again and honestly I didn’t even think I would find love.


“Then one day Heather jumped onto my boat, looked at me, smiled and the rest is history. Thank god for that day.


“My life is so much better with you in it… now let’s do this thing!!”


Wrote Young over the summer:


“Marrying my man SO SOON!!


“It’s all happening and what’s crazy is that I’m actually calm and relaxed about it.


“Tarek and I are on the same page with everything we want and everything else we’ve left up to our amazing wedding planners.


“We’re just excited to spend the rest of our lives together and that’s really what we want the whole day to be celebrating.”


The wedding and its preparations were filmed for a one-hour special titled Tarek and Heather The Big I Do, which will air on Discovery+ in December.


The marriage was a first for Young, and the second for El Moussa, who split from Haack — his Flip or Flop costar — in 2016 after seven years of as husband and wife.

Healthy Indian Food: Add The Goodness Of Garlic To Your Diet With This Lahsun Bharta
2020-03-17