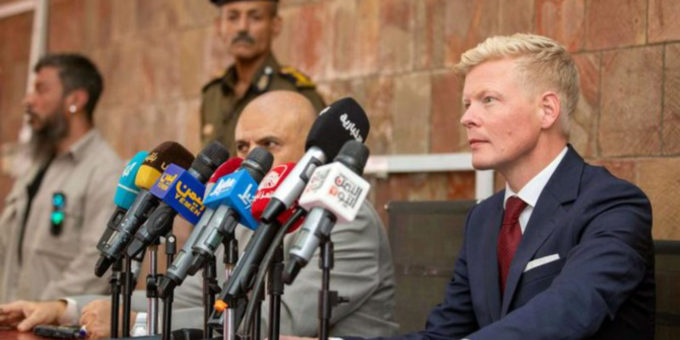 NEW YORK: Negotiations began in Amman on Wednesday between Yemen’s government and the Iran-backed Houthi militia over the reopening of roads in Taiz and other governorates.

The talks are taking place under the auspices of the UN. Hans Grundberg, the organization’s special envoy for Yemen, said that they are part of a two-month truce that was agreed in April at the start of Ramadan. He added that it is due to expire on June 2 but he is working with all parties to extend it.

Grundberg called on all of those involved to negotiate “in good faith” and take urgent action to reach an agreement on restoring freedom of movement and improving the living conditions of the people of Yemen.

“Yemenis have suffered for too long from the impact of road closures,” he said. “Opening roads in Taiz and elsewhere is a crucial element of the truce that will allow families divided by front lines to see each other, children to go to school, civilians to go to work and reach hospitals, and essential trade to resume.”

He added that also as part of the truce, important progress has been made in efforts to agree the resumption of commercial flights to and from Sanaa airport. More than 1,000 passengers have flown so far and the frequency of flights is increasing. Preparations are now under way to resume flights between Sanaa and Cairo, Egypt.

“This will allow more Yemenis to travel abroad to access medical care, educational and trade opportunities, and to visit family,” said Grundberg, who thanked the Egyptian government for its help arranging the flights and its “active support to the UN’s peace efforts.”

“I call on the parties to exercise maximum restraint to preserve the truce and to fulfill their obligations under international law to protect civilians,” said the envoy, who vowed to continue to work with all involved under the terms of the truce to “prevent, deescalate and resolve incidents.”

He added: “We have seen the tangible benefits the truce has delivered so far for the daily lives of Yemenis. The parties need to renew the truce to extend and consolidate these benefits to the people of Yemen, who have suffered over seven years of war.

“The truce has presented a window of opportunity to break with the violence and suffering of the past and move toward a peaceful future in Yemen. The parties need to seize this opportunity by implementing and renewing the truce and negotiating more durable solutions on security, political and economic issues, including revenues and salaries, to support a comprehensive political settlement of the conflict.

“The parties have the responsibility to safeguard and deliver on this potential for peace in Yemen.” College Enrollment Drops, Even as the Pandemic’s Effects Ebb

Dalit Brutally Thrashed In Haryana Village, Accused Yet To be Arrested
2019-06-24