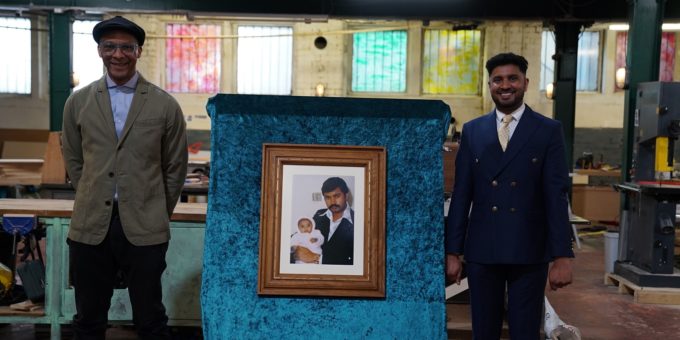 A tailor says he will treasure a wooden frame featuring a photo of his father who has died since it was made for him on a TV show.

Imran Khan, who runs IK Collections based, will appear on BBC Two’s Jay’s Yorkshire Workshop next week as one of the surprise recipients of a handmade piece of furniture.

In the show, hosted by Jay Blades, members of the public nominate heroes from across Yorkshire to receive a bespoke, handmade piece of wooden furniture to recognise the work they do for their community.

Jay then gives the task of making the items to one of his three experts in the workshop; Ciaran, Isabelle and Saf.

In next Wednesday’s fourth episode, Isabelle and her team make a brass inlayed picture frame from reclaimed iroko wood to thank Mr Khan, who helped elderly people and used his skills to make scrubs for doctors during the first lockdown last year.

A picture of Mr Khan when he was a baby being held by his father was the placed in the frame on the show.

But since the programme was recorded in Little Germany earlier this year, Mr Khan’s father, Mohammed Zamir, also known as Raja and suffered from dementia, died aged 67.

Mr Khan said: “I’m looking forward to it being on TV. Jay and his team have done an amazing job.

“It’s very sad. Dad was in a lot of pain. He had dementia and was really frail.

“The team on the show also sent two bunches of flowers and sent their condolences.

The picture we had in the shop was dropped and the glass cracked. It’s a picture of my dad picking me up as a baby. It’s nice to have this memory

“I was really shocked that I was chosen for the show. I knew my work colleague was up to something. It was really nice of them to put my name forward. I still don’t think I deserve it.”

From left, Jay Blades and Graham and Becky, who helped make the wooden picture frame for Imran Khan on the show

In the episode, a clearly shocked Mr Khan thanks the team for the gift and is dubbed a ‘proper gentleman in the community’ by host Jay.

Mr Khan’s company have previously made suits or given items to the likes of Prime Minister Boris Johnson, former Labour leader Jeremy Corbyn.

The designer made sure Captain Sir Tom Moore was suited and booted after kitting him out in three suits.

The 100-year-old replied and invited Mr Khan to his home where he completed his 100-lap challenge which raised more than £33 million for NHS charities.

He is the latest well-known name to be kitted out by IK Collections, which has a shop in Westgate, Bradford, with other clients including boxers Chris Eubank Jr, Amir Khan, Tyson Fury, DJ Tom Zanetti and Duncan James from boyband Blue.

Meanwhile, episode four also sees Jay go to Manningham, where he meets PC Husnain, who tells Jay that, having grown up there surrounded by gangs, his life could have turned out very differently if it hadn’t been for a youth worker called Sharat.

He wants to thank Sharat for keeping him on the straight and narrow and for helping lots of local young people over the years in the centre that he runs.

The programme’s mentor, Saf Fakir, from Thornbury, and his team craft an oak grandfather-style clock to celebrate Sharat and all the time he gives to others.

The programme will be broadcast on BBC Two at 9pm on Wednesday, September 15.