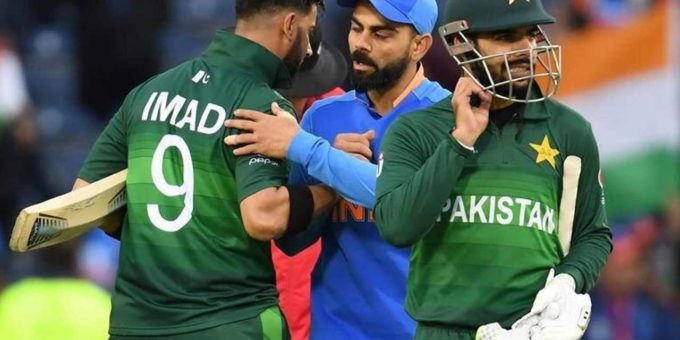 India and Pakistan
renew their high-profile but one-sided cricket rivalry on Sunday in a T20 World
Cup blockbuster watched by hundreds of millions of fans across the globe.

Virat Kohli’s India have beaten Pakistan in all of their 12
matches at the T20 and 50-over World Cups.

Pakistan, however, go into the contest with 10 wins in a row
in the United Arab Emirates, their home away from home for most of the last
decade.

It will be the first time the two nations have clashed since
the 50-over World Cup in 2019.

Of the 12 World Cup losses for Pakistan, five have been at
the T20 tournament.

Two were at the inaugural event in 2007 — a group game
decided by a ‘bowl-out’ and a five-run loss in the final.

“To be honest, what has passed is beyond us,” said
Pakistan captain Babar Azam on Saturday.

“Records are meant to be broken.”

The tickets for the match in Dubai were sold out within
hours of going on sale after the UAE government allowed a 70 percent crowd for
World Cup matches in a relaxation of the Covid-19 restrictions.

The South Asian nuclear rivals have only played in
multi-national events like World Cups and the Champions Trophy as strained
relations have stalled bilateral cricket since 2007.

Pakistan did tour India in 2012 for five limited-over
matches but ties were not fully resumed as the two nations continued to be at
loggerheads over multiple issues, with the disputed region of Kashmir and
terrorism heading the list.

“The matches between Pakistan and India are always full
of intensity so we need to perform well in all three departments of the
game,” said Babar, who has two T20 International centuries to his name in
2021.

India and 2009 champions Pakistan are placed in Group 2 of
the Super 12 stage of the tournament along with New Zealand, Afghanistan,
Scotland and Namibia.

The top two in each of the two pools progress to the
semi-finals.

Kohli, who steps down as India T20 skipper at the end of the
World Cup, described Pakistan as being “very strong”.

He also shrugged off the significance of his side’s
dominance.

“These things create distractions. What matters is how
we prepare and execute on any particular day, regardless of the
opposition,” he said.

“You have to play your best cricket against them,
because they have lots of talent and players who can change the game.”

India, who bowed out of the semi-finals in the previous
edition in 2016, outplayed England and Australia in their two warm-up matches
in Dubai with top batsmen KL Rahul and Rohit Sharma scoring half-centuries.

The pace attack led by Bhuvneshwar Kumar and Jasprit Bumrah
is looking good and premier spinner Ravichandran Ashwin got Australia’s David
Warner and Mitchell Marsh off successive deliveries in their last tune-up.

Kohli backed his team’s match winners including Hardik
Pandya to come good in the tournament despite the all-rounder struggling with
his bowling.

“He is getting better in terms of getting prepared to
bowl two overs for us,” said Kohli.

Despite the anticipation ahead of the game, the political
soundtrack is also playing in the background.

During the week, there were protests in India with calls to
boycott the match in the wake of recent killings of 11 migrant workers and
minority Hindus and Sikhs in Indian-administered Kashmir.