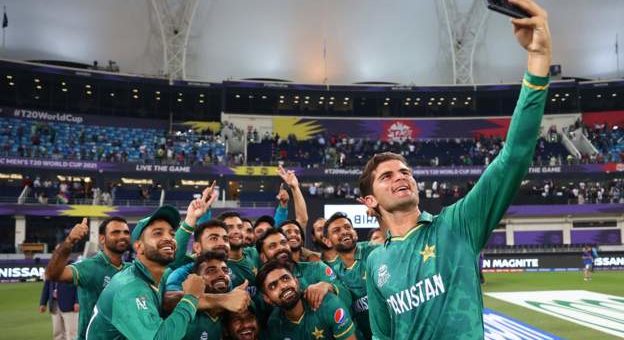 It turned into a night beyond Pakistan fans’ wildest dreams.

They didn’t just beat India, their greatest rivals, at the Men’s T20 World Cup – they thrashed them in the most emphatic fashion.

It was a win so big, so important, that it reduced captain Babar Azam’s father to tears in the stands.

India had won every meeting between the sides at World Cups before this. In Dubai, “29 years of hurt” were ended.

“I have seldom in my life felt happiness like this,” said Test Match Special commentator and avid Pakistan fan Aatif Nawaz.

“I can’t think of a single moment I have enjoyed more than this.”

Losing to your biggest rivals once at a World Cup hurts.

Doing so 12 times, a run going back to 1992, without being able to strike a blow of your own must be gut-wrenching.

“It was such a remarkable result because nobody expected it to happen in that fashion, to happen so spectacularly,” Nawaz told BBC Sport.

“This win will bring happiness to the whole country, it will put a smile on everyone’s face in such a difficult time.

“The India players were very gracious. It means so, so much. This has spread sheer joy across all of Pakistan.”

Back home, fans watched the game in restaurants, shops and in cinemas. When the winning moment came, people took to the streets to celebrate. Pakistan’s prime minister, the cricket legend Imran Khan, tweeted his congratulations.

It was the first time the two sides had met since 2019 – another of India’s wins at the 50-over World Cup in England.

The noise inside the Dubai International Stadium was deafening but as Pakistan began their run chase of 152, it quietened. As they romped towards victory, most of the India fans began to head for the exits.

The green shirts stayed put, however. This was their moment – for them, it was 13th time lucky.

Everything went right for Pakistan. They won the toss and bowled first, knowing that it would be easier to chase under the lights.

After 15 balls, India were 6-2. Rohit Sharma, India’s titanic opener, and KL Rahul, one of the world’s form players, had been blown away by pace bowler Shaheen Afridi who stood, arms outstretched, beseeching the crowd as his teammates surrounded him in celebration.

Virat Kohli, always a man for a big occasion, stood firm. But Pakistan kept chipping away. The resulting total, 151-7, was big, but not impossible.

Babar Azam and Mohammad Rizwan strode out to the middle, knowing that history was against them. But they never look flustered.

The third ball of the innings was sent into the stands by Rizwan. Babar followed suit, flaying the ball all over, while his opposite number stood, arms crossed, chewing his lip, wondering what he could do.

After hitting the winning runs, Babar leapt into the air, mouth open in a roar. Rizwan ran half the length of the field before racing back to embrace his captain.

The first person to approach them was Kohli. He hugged them both, big smile on his face as he congratulated them for what was a simply astonishing run chase.

Both sides know how big this victory is, and what a huge draw India-Pakistan matches are.

Rizwan said afterwards that “the whole of Pakistan” was watching – and he knows how it feels to be sat watching, unable to do anything.

“Congratulations to the whole of Pakistan and all our people as we were all waiting for this win,” he said.

“I used to watch all the Indo-Pak matches on television and used to pinpoint where we made mistakes.

“But today’s game was great and after Shaheen got those wickets we were confident we would win.”

Win they did. In doing so Pakistan gave their fans a night they will never forget.

Chhapaak Movie Review: Deepika Padukone Stars in a Film with Flimsy Script but a Sound Message
2020-01-09