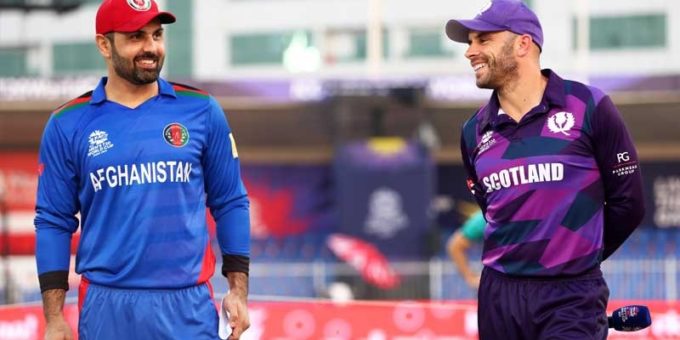 Afghanistan skipper Mohammad Nabi won the toss and elected to bat in their opening Twenty20 World Cup match with Scotland on Monday.

The Afghans, who briefly faced the possibility of being banned from the tournament if the women’s game was discontinued by the new Taliban regime, come into the competition as a dangerous T20 side.

Nabi, who is the top-ranked all rounder in T20, said his team are upbeat about both their batting and bowling.

“The wicket is dry and good for batting,” said Nabi whose side beat the West Indies in a warm-up match.

“We had a really good game against the West Indies in the warm-up. We’ll try to repeat that combination and performance.”

Scotland booked their Super 12s spot for the first time in the T20 World Cup after three successive wins in the qualifying stage.

They come in unchanged from their previous win over hosts Oman last week and skipper Kyle Coetzer said he is happy to bowl first.

“Even in IPL (Indian Premier League) we saw chasing teams having that advantage so really happy,” said Coetzer.

“Privileged to be here. The team has been performing well and at the moment we are comfortable sticking to the same team.”

Kremlin says market reaction to Omicron strain is emotional, not based on data
2021-11-29

Tokyo Olympics: The challenges of training in a Covid pandemic
2021-04-24

Kangana Ranaut WALKS OUT of Anurag Basu’s Imali, reveals the reason why
2019-04-03