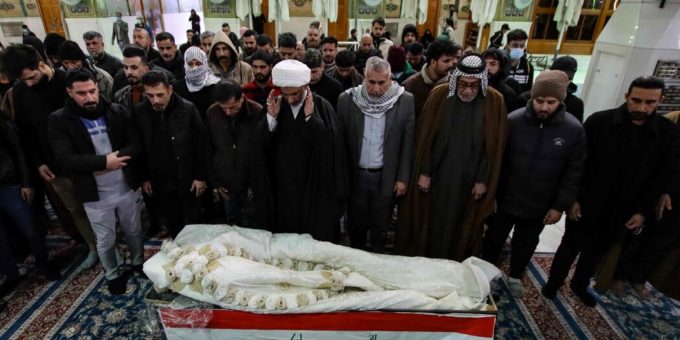 BAGHDAD — An audacious attack on a Syrian prison that houses thousands of Islamic State detainees. A series of strikes against military forces in neighboring Iraq. The dissemination of a video showing the beheading of a kidnapped Iraqi police officer.

The evidence of a resurgence of Islamic State in Syria and Iraq is mounting by the day, three years after the militants lost their last territorial foothold in the so-called caliphate, which once stretched across vast parts of the two countries. The fact that ISIS was able to mount multiple, coordinated and sophisticated attacks is evidence that what had been believed to be disparate sleeper cells are re-emerging as a more serious threat.

“It’s a wake-up call for regional players, for national players that ISIS is not over, that the fight is not over,” said Kawa Hassan, Middle East and North Africa director at the Stimson Center, a Washington research institute. “It shows the resilience of ISIS to strike back at the time and place of their choosing.”

On Thursday, Islamic State fighters attacked a prison in the northeastern Syrian city of Hasaka in an attempt to free the 3,500 ISIS prisoners held there and took a group of detained boys hostage to use as human shields. The assault drew the U.S. military into fight in what has become the biggest confrontation between American forces and ISIS in three years.

By Tuesday, the ISIS attackers still controlled part of the prison in Hasaka, even after the U.S. sent in ground troops and air support for the Kurdish-led forces trying to take it back.

In Iraq last week, around the same time as the prison attack began, ISIS fighters stormed an army outpost in Diyala Province, killing 10 soldiers and an officer in the deadliest attack in several years on an Iraqi military base. Gunmen approached the base from three sides late at night while some of the soldiers slept.

The success of the attack raised fears that some of the same conditions in Iraq that allowed for the rise of ISIS in 2014 were once again making room for it to reconstitute.

On Tuesday, ISIS fighters seized a village from the Syrian government, according to the Kurdish-led Syrian Democratic Forces. An S.D.F. spokesman, Farhad Shami, said that ISIS captured the village of Rasafa, about 30 miles from the city of Raqqa.

In December, ISIS kidnapped four Iraqi hunters in a mountainous area of northeast Iraq, including a police colonel. The militants beheaded the police officer, and then released a gruesome video of the kidnapping that was reminiscent of what was once a common practice during the reign of ISIS.

The attacks in Iraq, conducted by ISIS sleeper cells in remote mountain and desert areas, have highlighted a lack of coordination between Iraqi government forces and the Peshmerga, Kurdish forces that answer to the government of the Iraqi Kurdistan Region. Many of the attacks take place in disputed territory claimed by both the Iraqi Kurdish government and the central government.

Ardian Shajkovci, director of the American Counterterrorism Targeting & Resilience Institute, said many of the ISIS fighters arrested in attacks since the group lost the last of its territory three years ago were younger and came from families with older members who had ties to ISIS.

“If so, this is a new generation of ISIS recruits, changing the calculus and threat landscape in many ways,” he said.

Iraq has struggled to deal with tens of thousands of Iraqi citizens who are relatives of ISIS fighters and have been collectively punished and placed in detention camps, which are now seen as breeding grounds for radicalization.

Corruption in Iraqi security forces has left some bases in the country without proper supplies and allowed soldiers and officers to neglect their duties, contributing to the collapse of entire army divisions which retreated in 2014 rather than face ISIS.