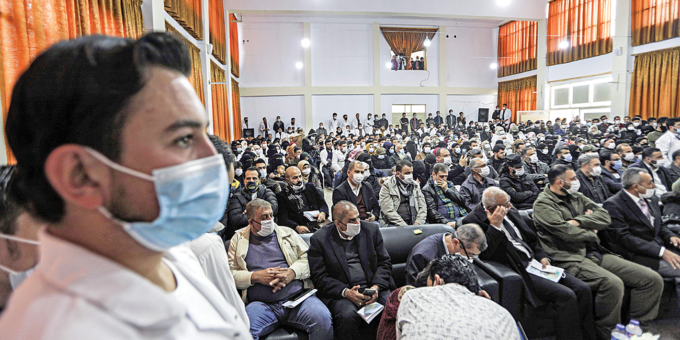 AL-MUKALLA: Thousands of Yemenis, African migrants and internally displaced people have been deprived of vital healthcare services as UN organizations cut their programs throughout the war-torn country because of a shortage of funds, local Yemeni officials told Arab News.

The World Health Organization announced on Saturday that it was cutting support to thousands of health workers and health facilities across the country, which threatened to aggravate the country’s humanitarian crisis.

“Due to an unprecedented financial gap, @WHO & health partners have been unable to continue their financial support to the health care workforce in #Yemen. Up to 10K health workers are affected. More funds are needed now more than ever to enable the continuation of this support,” the WHO Yemen office said on Twitter.

The International Organization for Migration (IOM) office in Yemen made a similar announcement about reducing their operations on the ground, including monitoring the flow of African migrants, due to a lack of funds and a sharp drop in the number of African migrants to the country this year.

“IOM is adapting its programming to the realities on the ground and available funding. As a result of the COVID-19 pandemic, migration to Yemen has greatly reduced since March,” said Olivia Headon, IOM spokeswoman in Yemen, adding that the number of African migrants has decreased by 90 per cent over the past several months compared to last year, another reason for reducing the organization’s activities at the entry points for the migrants in southern Yemen provinces.

“IOM’s health assistance in Yemen is severely underfunded and, with such financial constraints, we have had to refocus our health programming. Unfortunately, this has affected assistance for both migrants and displaced people,” Headon said.

Local Yemenis have felt the effects of UN humanitarian assistance cuts. Yemeni officials told Arab News that dozens of health workers at UN-funded facilities have been laid off, forcing many patients to travel hundreds of miles to get treatment.

In the densely populated central province of Marib, health officials said that slashed health assistance by WHO Yemen has had a huge impact on their ability to deliver services to thousands of internally displaced people and the war wounded.

Dr. Abdul Aziz Al-Shadadi, the director of Marib’s Ministry of Health office, said on Tuesday that at least a dozen medical specialists in Marib were laid off, leading to the closure of many sections at three facilities in the province.

“The cut of the meager support from the UN body has placed unprecedented pressure on us,” Al-Shadadi said, adding that surgery and mother and child departments at Marib’s Harib district had been closed due to lack of funding. “We are facing huge pressure. We receive thousands of patients from Al-Bayda and Jouf after Houthis seized control of health facilities there,” Al-Shadadi said, urging WHO to resume activities and financial support mainly to medical specialists.

Employees at IOM told Arab News that the organization informed them that it would end their contracts by the end of this month, even as the country is bracing for a new wave of migrants from Ethiopia fleeing violence at home.

IOM’s spokeswoman said the organization would reduce its field teams in the southern province of Shabwa, a key arrival entry for migrants, from three to one due to the sharp decrease in the number of African migrants and funds. According to IOM figures, the total number of migrants who arrived in Yemen in August, September and October this year is 1,703, compared to 27,260 migrants during the last three months last year.

However, residents in Shabwa talk about a continuing flow of migrants to the coasts of the province. One resident said migrants told him that a large number of Ethiopians who fled fighting at home were gathering in Bosaso in Somlia and were due to sail to Yemen.

Local officials in Shabwa said that they had been left to deal to the influx of migrants as the IOM reduces operations in the province. “The flow of African migrants has never stopped for the past 20 years. We want the UN to build camps for the migrants, feed them and arrange repatriation trip to them,” said a government official.

Opinion | A Turkish-German Couple May Save Us From the Virus. So Why Is Germany Uneasy?