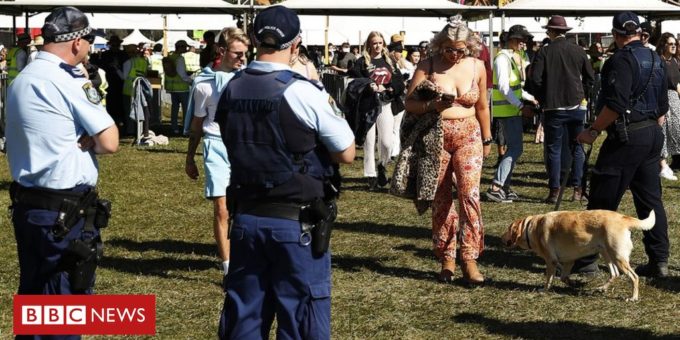 Police in Sydney asked a young woman to remove her tampon during a strip-search, a law enforcement review has found.

It was among instances of police misconduct uncovered in an investigation into five controversial strip-searches across Sydney last year.

Most took place at music festivals and left those searched feeling humiliated and degraded, the report said.

New South Wales Police said it would consider the findings of the report.

The Law Enforcement Conduct Commission report called on the police force to apologise to one of the young women involved, and noted in another case that an officer had been suspended from duty.

The cases were reviewed either after parents of the women complained or they received coverage in local media.

Questions over the legality of the searches – all targeting drugs – was a “recurring” issue, the report said.

It has added to public scrutiny of searching practices and calls for reforms.

What did the incidents involve?

In one instance in January 2019, police strip-searched two young women outside a Sydney casino – one was asked by an officer to remove her tampon.

A review of that incident “revealed a lack of clarity for [officers] regarding the lawfulness of such a request”, the report said.

That prompted a review of other cases where complaints had been made and no drugs had been found.

In another case, a young performer at the Secret Garden festival was ordered to pull down her underwear and bend over before being spoken to unprofessionally and laughed at by male officers, the report said.

A woman strip-searched at another festival was made to squat and cough and wasn’t given adequate privacy.

The review found that in many cases, police reported not knowing what they could do in a strip-search. It noted a new manual was introduced last August to instruct officers correctly.

But the examples raised questions over the legality of police conduct, pressure to conduct searches, and poor communication and record-keeping, the report added.

Under Australian law, police can only carry out strip-searches if “the seriousness and urgency of the circumstances” means it is reasonable and necessary to do so.

They must also conduct the least invasive search possible. It is illegal to search genital areas or any body cavities.

In the case of minors, a parent or guardian must be present, unless an immediate search is necessary to protect the person or prevent the destruction of evidence.

But allegations of aggressive strip-search tactics by police have caused controversy.

Last year, a separate inquiry heard a 14-year-old boy was asked to hold his exposed genitals for police in one of at least 25 potentially illegal strip-searches at a music festival for under-18s.

An officer told that inquiry that strip-searches at festivals were necessary because of concerns over drug use, after several young people died from overdoses.

This prompted calls for alternative solutions such as pill-testing facilities at such events, and criticism of punitive police actions such as strip-searches.

Lightning, As Seen From Space, Captured In Stunning Video By NASA Astronaut