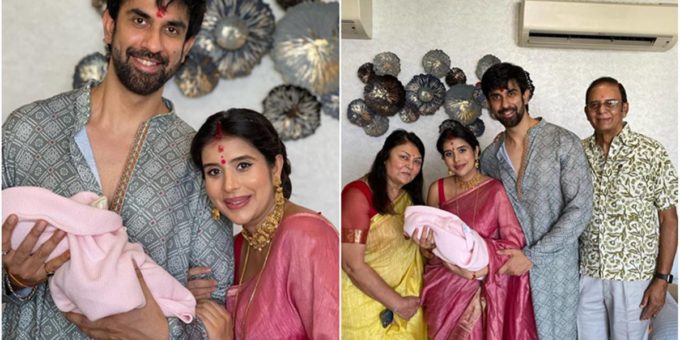 Sushmita Sen had announced earlier this month that she has become a proud aunt to brother Rajeev Sen and Charu Asopa Sen‘s daughter. On Saturday, the couple revealed the name of their newborn daughter. Rajeev and Charu went live on their respective social media handles to announce their daughter’s name, Ziana. “Ziana means brave and bold with a lot of grace. This name signifies that the child will be protected by God,” Charu explained the meaning of the name.

On her YouTube channel, Charu said that the name was suggested by Sushmita’s younger daughter Alisah. “So basically, Didi (Sushmita) had thought of names for a baby boy and a baby girl. In the names suggested for a boy, we loved Ziaan. When we were blessed with a girl, Didi told us that Alisah has suggested Ziana. So, that’s how we decided on it,” Charu said. Adding to Charu, Rajeev said, “She is so little herself but the way she wrote the meaning of the name, she beautifully explained the name. I love you Alisah for such a beautiful name. We love you and Didi.”

They concluded the live by mentioning, “Whenever we will make you meet her, you will know that the name fits perfectly on her.” Rajeev Sen and Charu announced the name after a couple of days of embracing parenthood. Sushmita had announced the news of becoming a proud bua aka an aunt earlier this month with an adorable post.

“Lakshmi arrives just before Diwali!! IT’S A GIRL!!!! Congratulations @asopacharu & @rajeevsen9 …what a beauty she is!!! I BECAME A BUA THIS MORNING #sooooooohapppyyyyyy. Not allowed to share baby pictures yet, so sharing mine from just before Charu delivered our little Angel I was blessed to witness it!!! Thank you Doctor @rishmapai for making this such a beautiful & peaceful experience!! You’re just the BEST!” she wrote.

The actor is currently busy with Aarya 2.

Anti-Houthi forces move out from Hodeidah

US Embassy denies MCC office at Temple Trees; What about the proof that Weerawansa produced?
2019-04-06