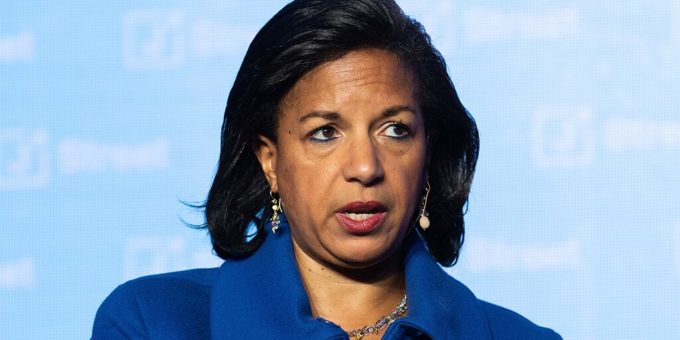 That was the question then-U.S. Ambassador to the U.N. Susan Rice’s mother asked when she told her she would be appearing on all five Sunday morning political shows on Sept. 16, 2012 — just five days after the terrorist attack on the U.S. consulate in Benghazi, Libya. The plan was to appear in place of then-Secretary of State Hillary Clinton, at the White House’s request.

The exchange was detailed in Rice’s new book, “Tough Love: My Story of the Things Worth Fighting For,” as she recalled what led to and what fueled the biggest political controversy of her government career — those appearances on “Fox News Sunday,” ABC’s “This Week,” CBS’ “Face the Nation,” NBC’s “Meet the Press,” and CNN’s “State of the Union.” Her flawed characterization of the attacks as resulting from a spontaneous protest later made her the target of GOP criticism that ultimately led to her withdrawing from consideration to succeed Clinton as secretary of state.

Looking back, Rice insisted in her book that she does not believe Clinton set her up – Rice’s mother feels differently – but recognizes that Clinton and National Security Adviser Tom Donilon likely knew what was coming.

“I do believe that Hillary Clinton and Tom Donilon appreciated what I did not,” Rice said. “The first person to tell the public about a highly political tragedy was likely to pay a price.”

In the memoir, Rice recalled delivering talking points provided to her by the CIA, which were corrected after the fact — the result, she said, of updated intelligence. She soon became the face of the Obama administration’s response to the attack, which was strongly criticized by GOP lawmakers.

During her appearances, Rice said that the terrorist attack in Benghazi spun out of “demonstrations” that had been taking place.

“This information turned out to be wrong,” Rice wrote, “and days after my appearance, the [Intelligence Community] revised its judgment to reflect their subsequent determination that there were no protests.”

Rice was also called out for supposedly claiming that the attack was in response to an anti-Muslim video that was posted online. In her book, she insisted this is not what she said — making the distinction that the video was her stated reason for unrest in Cairo, Egypt, and that the Benghazi attack was in turn inspired by what was happening in Cairo.

The political climate was tense at this time, less than two months before a presidential election, but Rice described the period after the election as even worse, “because there was no end in sight to the incoming hits.” At this point, Rice was being considered for the secretary of state job. She lamented that with the exception of President Barack Obama himself, she did not feel that the White House had her back at this time.

“I was distressed initially to see little pushback coming from the White House, with the very notable exception of the president himself,” she recalled. “I needed colleagues in the White House to assist from the podium in the press room and to provide support to my small press and legislative affairs teams.” At one point, she cried to her husband that she felt like she was “floating out here alone, without the necessary support.”

Rice faced attacks concerning her capabilities from Republican senators, including Lindsey Graham, the late John McCain and Kelly Ayotte. She eventually took herself out of the running. Rice’s 9-year-old daughter was undergoing tests for “frightening hallucinations” and Rice’s mother was “traumatized,” she wrote.

But Rice explained that she “would have felt guilty and selfish” if she had refused to go on the shows that fateful Sunday. “I am a team player, and I don’t like shunting off on others what I am capable of doing.”

In hindsight, however, she said: “By deferring to that instinct, by putting the cause and the team first, I did myself a disservice.”