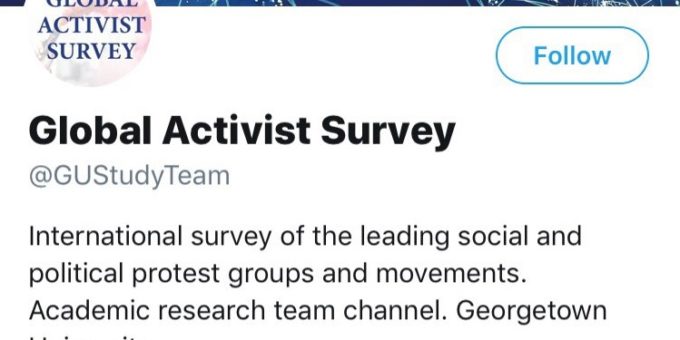 A survey promoted on Twitter asked users if they support Hizb-ut-Tahrir or Islamic Forum and offered a £15 Amazon Gift Card for your troubles.

The Global Activist Survey (@GUStudyTeam) was being promoted on the social media network with a link to Georgetown University, Washington.

The University have been contacted for a response to confirm if this was an official survey. We are awaiting a response to an request sent in December.

The majority of the 100 followers were users with less than 20 followers. But now the account has disappeared and despite requests from Asian Image on clarity we have not been able to verify why this survey was being promoted in this way.

The link appeared as a ‘Promoted Tweet’ so we decided to take a more closer look.

The Twitter address now appears dead but here is what we found before the link was taken down.

Having agreed to take part in the survey we are welcomed with the following statement, “Welcome to the research survey!

“We are interested in understanding the leading social and political activist movements in Britain.  You will be presented with information relevant to social movements and asked some questions. Please be assured that your responses are anonymous and will be kept completely confidential.

“Your participation in this research is voluntary. You have the right to withdraw at any point during the survey, for any reason, and without any prejudice. If you would like to contact the study team to discuss this research, please e-mail the study team here.”

Questioning begins on the far-right with specific links to ‘Tommy Robinson. Associated groups include the English Defence League, DFLA, For Britain, Generation Identity and many others’

Participants are asked their opinions on supporting or rejecting the ‘Counter Jihad Movement.’

We then move on to Islamist organisations stating ‘The Islamist movement in Britain advocates for a public and political life guided by Islamic principles’ – ‘Please indicate how much you agree and disagree with the following.’ A number of options are then listed.

Questions then focus on ‘Islamism’ with a particular focus on Dr Abdul Wahid, Executive Chairman of Hizb-Ut-Tahrir, Britain.

Among the views participants are asked, “Please indicate how much you agree or disagree with the following about Abdul Wahid and the Islamist movement:

“Abdul Wahid increases others optimism for the future.

“Abdul Wahid does not have a vision that spurs people on.

“On a personal level, I relate to Abdul Wahid.”

It further asks if you agree or disagree with the following statement attributed to Abdul Wahid.

Later we are asked; “Do you see yourself as an Islamist supporter?’ and “What is the most important political or activist group that is most important to you.”

An email where respondents can ask for clarity on any details is a gmail address.

When contacted we were initially told, “Thank you for reaching out and for the interest in our research. We have prepared responses to your questions and are waiting for our press office to sign off. We expect to have answers to you later today.”

None has since been forthcoming.