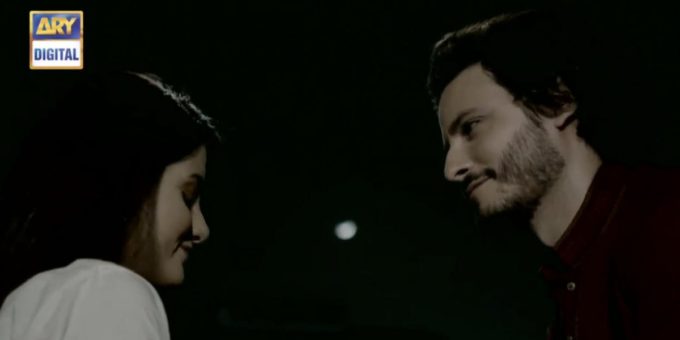 As of late, a handful of directors, producers, creative heads, writers and so forth are making an active effort to produce content that creates an impact and imparts a social message, one that they believe is important for the audience to absorb. Surkh Chandni is one such show. Produced by Sana Shahnawaz, Samina Humayun Saeed and Humayun Saeed, Next Level Entertainment have created a show that seeks to highlight the plight of acid attack victims – not only what they go through physically, but also mentally and emotionally.

In episode 1, the show opens with the lovebirds, Ammar (Osman Khalid Butt) and Aida (Sohai Ali Abro) meeting on the roof, where Ammar presents Aida with a phone in order to have the opportunity to speak with her on a regular basis.  The love the two characters share is presented throughout the episode as a pure, devoted relationship.  Osmaan and Sohai are naturals and share great chemistry, making their relationship seem all the more believable.

Of course, how can a love story continue without conflict?  The conflict in Surkh Chandni comes from two angles – the first being Aida’s Bhai and Bhabi.  Aida’s brother, played by Hassan Ahmed, and Bhabi, played by Mansha Pasha, basically hoard control over the household as they are the ones paying the bills.  This scenario is particularly grim taking in account future occurrences. Despite Aida’s parents defending her, they are helpless in front of their son and daughter in law.

The second conflict is in the form of our main antagonist, Jawad (Asad Siddiqui).  Jawad is taken by Aida and declares that she belongs to him in the first scene. Aida, however, rejects Jawad outright, leaving no room for confusion. Straight away, Asad Siddiqui deserves praise for his portrayal of a character that invokes pure disgust.  The ego, attitude and anger that Jawad exudes requires a great actor in order to make Jawad feel realistic – and it’s here that Asad excels.

The conflict between Ammar and Jawad is made visible in a scene where the two verbally spar with one another on the topic of success.  Jawad recruits Aida’s Bhabi, to assist him in winning Aida’s hand for marriage, while on the other end, Aida confides in Ammar about her discomfort with Jawad and asks him to propose as soon as possible.  The situation comes to a head when Jawad and Ammar both show up at Aida’s house at the same time with their proposals.  The family happily accepts Ammar’s proposal, leaving Jawad angry and hostile after facing rejection.

Jawad then jumps the wall and lands in Aida’s room when she is alone and becomes aggressive with her, prompting a cat-and-mouse chase until Aida runs into the street.  Kudos to the writers for showing Jawad’s obsession in the way it needed to be shown.  His indifference towards Aida being home alone and the scene he creates on the streets shows his disregard for Aida’s reputation and the lack of respect he holds for her.  Jawad is a man who wants Aida out of “zidd,” treating her like a piece of property he must own.

Aida’s Bhabi, on Aida’s wedding day, hatches a plot with Jawad.  The viewers are not made aware of the plot, but she takes an oblivious Aida to the parlor to get ready for the wedding and anxiously awaits Jawad’s arrival.  Of course, viewers can predict what happens next.

Surkh Chandni is off to a great start and has set the characters up well in the first episode.  How the show unfolds and proceeds to tackle the subject will determine how successful the show will be – but they are off to a promising start!

Hannah Brown: I’mma Get That D This Season! (Whether Luke P. Likes It Or Not!)

Who is Gabriel Boric? The radical student leader who will be Chile’s next president | Chile
2021-12-20

High-Protein Diet: How To Make Soya Uttapam For A Fulfilling, Healthy Bite
2020-10-24