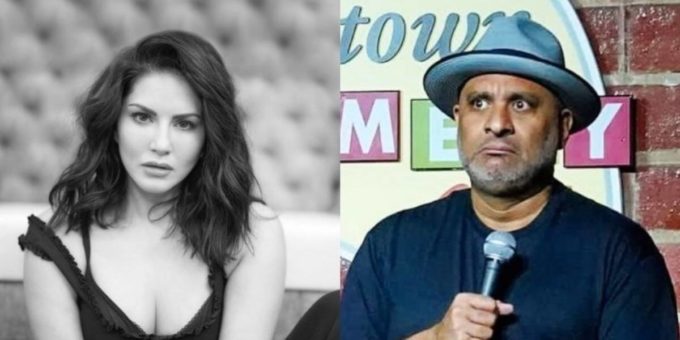 Actor Sunny Leone revealed she dated comedian Russell Peters several years ago, but it only lasted for a ‘hot second’. She added that the two were close friends for a long time, and their friendship grew complicated after they started dating.

During her episode of One Mic Stand season two, Sunny told comedians Sapan Verma and Neeti Palta, “I dated a comedian but it was like, for a hot second. It wasn’t for a very long time.” She mentioned that she was talking about Russell.

“We messed it up. I mean, we were friends for years, why the hell would we start dating? It was the worst thing ever that we could have ever done and I am still mad to this day, because we would be such good friends still,” she added. Neeti asked Sunny if she is in any of Russell’s jokes, to which she replied, “I have heard that I am in a couple of his jokes.”

In an interview with Hindustan Times in 2013, Russell had talked about his relationship with Sunny and called her a ‘real sweetheart’. He said, “Yes, we did date each other. It was five-and-a-half years ago. It was a wonderful time. She’s a real sweetheart, you know.”

One Mic Stand Season 2 was Sunny’s first attempt at being stand-up comedian. Talking about the opportunity, she had said in a statement, “I have loved stand-up comedy, and I have watched several shows here and abroad as well. Seeing a comedian perform on stage looks so simple and natural. The reality of how difficult it is to actually connect with audiences and make them crack on every joke is something I have learnt very closely now.”

Sunny is married to Daniel Weber, and the couple have three children, six-year-old daughter Nisha, and three-year-old-twins Noah and Asher. Sunny often shares photos and videos of her family on Instagram, including her infamous pranks on Daniel.