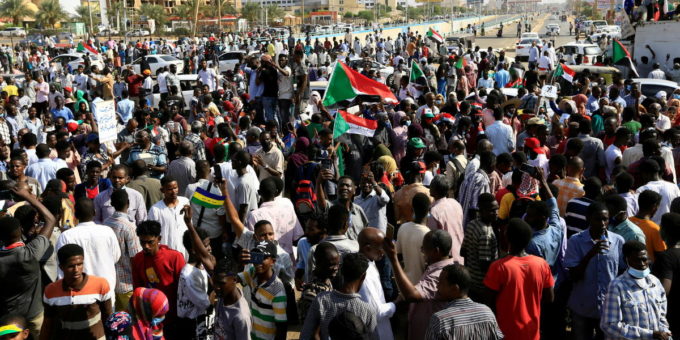 CAIRO: Pro-military protesters briefly blocked major roads and bridges in Sudan’s capital Sunday, amid growing tensions between the generals and the pro-democracy movement that fueled the uprising against autocratic former president Omar Al-Bashir.
The development came a day after US Special Envoy for the Horn of Africa Jeffrey Feltman met with military and civilian leaders in Khartoum to find a compromise to the dispute.
The souring ties between the military and civilians in the ruling government threaten Sudan’s fragile transition to democracy since the military’s ouster of Al-Bashir and his Islamist government in April 2019 after nearly three decades of autocratic rule.
The current crisis surfaced with a coup attempt last month. Officials blamed Al-Bashir loyalists for the move. But the generals lashed out at the civilian part of the government, accusing politicians of seeking government posts rather than helping ease people’s economic suffering.
Gen. Abdel-Fattah Burhan, the head of the ruling Sovereign Council, said that dissolving the government of Prime Minister Abdullah Hamdok could resolve the ongoing political crisis. That suggestion was rejected by hundreds of thousands of pro-democracy protesters who took to the streets of Khartoum and elsewhere in the country Thursday.
That generals’ accusations, echoed by Burhan and his deputy, Gen. Mohammed Hamdan Dagalo, commander of the feared paramilitary Rapid Support Forces, have aroused fears among civilians that the military may eventually hijack the country’s transition to civilian rule.
Pro-military protesters rallied in Khartoum earlier this month, echoing Burhan’s demands. The protesters have since held a sit-in outside the presidential palace in the capital. Last week, they attempted to storm the Cabinet headquarters as Prime Minister Abdalla Hamdok met with his Cabinet. Security forces dispersed them using tear gas.
On Saturday, dozens of pro-military protesters stormed the reception area of the headquarters of the country’s state-run news agency and set tires ablaze outside the agency offices. It delayed a news conference for pro-democracy activists, according to Mohamed Abdel-Hamid, director of SUNA news agency.
In an escalation Sunday, pro-military demonstrators cut off major roads and bridges, including the Mec Nimr Bridge, which links Khartoum’s downtown with other areas of the capital, according to activist and rights defender Tahani Abbas. The move caused traffic to clog the streets early Sunday, the first work day of the week, especially Nile Street, a main traffic artery in Khartoum.
“What is happening … is an official coup sponsored by Burhan,” she said. Abbas shared photos of protesters blocking a bridge with passenger buses and vehicles being turned back.
Later in the day, security forces dispersed the protesters using tear gas to open the blocked roads. Video on social media purportedly showed protesters fleeing over the bridge and on Nile Street.
Feltman, the US envoy, met in Khartoum with Buhan, Dagalo and Hamdok and “emphasized US support for a civilian democratic transition in accordance with the expressed wishes of the Sudanese people,” the US Embassy in Khartoum said.
He urged Sudanese leaders “to commit to working together to implement the constitutional declaration and the Juba Peace Agreement” between the government and an alliance of rebel groups, the embassy said.
The tensions come weeks ahead of a scheduled rotation of the leadership on the ruling sovereign council from the military to civilians, according to the constitutional declaration that established the joint government in August 2019.

Fined, another ride-sharing biker sets his motorcycle on fire
2021-10-21