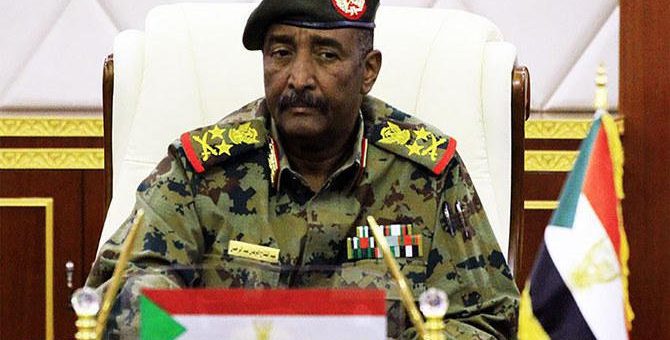 Al-Burhan is on his first trip abroad since taking power following the ouster in April of Sudanese President Omar Al-Bashir after months of protests.

El-Sisi and Burhan “agreed on the priority of supporting the free will of the Sudanese people and its choices,” Egyptian presidency spokesman Bassam Rady said.

El-Sisi also said Egypt was ready to “provide all means of support to the brothers in Sudan to overcome this stage in line with the aspirations of the Sudanese people, away from external interventions,” according to the spokesman.

The visit comes a few hours after a visit paid by the vice chairman of the Sudanese Interim Military Council, Mohammad Hamdan Duklu, to Saudi Arabia to meet with Crown Prince Mohammed bin Salman.

The Alliance for Freedom and Change umbrella movement is at odds with the military council over whether the transitional body to rule Sudan should be headed by a military or civilian figure. The negotiations have been on hold since Monday.

Protest leaders were set to hold meetings with demonstrators at a sit-in outside the army headquarters in Khartoum on Saturday to discuss how to resolve the deadlock.

On Friday, they said their strike at “public and private institutions and companies,” accompanied by civil disobedience, was “an act of peaceful resistance with which we have been forced to proceed.”

Thousands of protesters remain at the sit-in to demand the departure of the generals, who seized power after ousting Al-Bashir.

Protest leaders have called for people to march on Sunday from residential areas of Khartoum toward the sit-in.

Several rounds of talks have so far failed to finalize the makeup of the new ruling body, although the two sides have agreed it will hold power for a transitional period of three years.

Western nations have called on the generals to hand power to a civilian administration, while the ruling army council has received support from regional powers.

Al-Burhan thanked Gulf states — including Saudi Arabia and the UAE — and Egypt for their support during the current tumultuous times.

Opinion | Do Not Trust That Stranger’s 5-Star Review